We’ve driven to Las Vegas more times than I care to remember, but on this trip we had six new DDD places to check out.  A real treat. 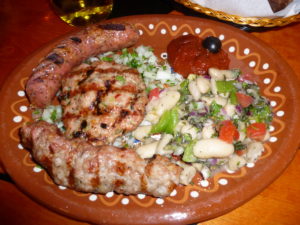 We first headed to Forte European Tapas Bar & Bistro.  We were way too early for dinner and so we didn’t have to wait for a table.  The décor inside has to be seen to be believed.  It was very colorful yet elegant.  Our server, Denitza, took great care of us; and we got to meet the owner, Nina Manchev.  If you haven’t seen the DDD segment, I don’t want to spoil it for you.  If you have seen it, then you’ll understand all the fun things we had to talk to Nina about, not the least of which is the great food.  Nina is talented, sharp, warm and gracious.  She posed for a picture with Anna but sadly it did not turn out. 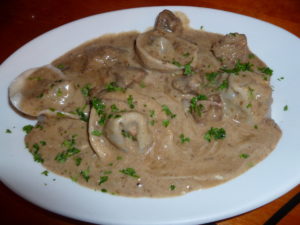 We ordered the mixed grill plate that was made on the show, as well as an order of beef stroganoff.  We were first served an irresistible basked of bread called Lepina.  The rest of the food came out promptly and it was a delight.  All three sausages were great, and our favorite was the Kebabche (the one in the foreground).  The salad, slaw, and sauce made for a fun variety of tasting sensations.  The stroganoff was the best I can ever remember having in a restaurant (note it was more of a tapas portion than an entrée portion).  Between the two dishes, the bread, the great service and lovely atmosphere, Forte was a big hit with us and it gets our highest recommendation.  It’s a little off the strip, but well worth the short trip. END_OF_DOCUMENT_TOKEN_TO_BE_REPLACED

For those not familiar with California, the stretch of coastline roughly between San Francisco and Los Angeles is referred to as the central coast.  More specifically between Monterey to the north and Santa Barbara to the south.  It’s a very popular destination for Californians to beat the heat of the blistering hot California summers.  The main hub of the central coast could be referred to as Pismo Beach/Morro Bay/San Luis Obispo.  Anna and I go there as often as we can, but we rarely make it as far south as Santa Barbara.  We were long overdue for a visit to Santa Barbara, and when we saw Guy Fieri visit Norton’s Pastrami Deli, I knew we would be visiting soon. END_OF_DOCUMENT_TOKEN_TO_BE_REPLACED

We decided to try our luck at Bette’s Oceanview Diner.  The place was packed and we had to wait for a table, maybe 20 minutes.  Every seat was full and the tables are packed tight.  They have an open kitchen and we got a table near the action.  We drew a nice young waitress, Haley, who took pretty good care of us. 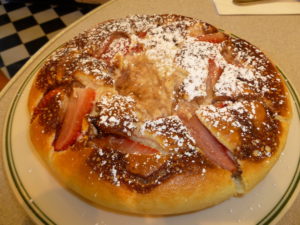 Anna ordered the pancake soufflé with strawberries and a chocolate swirl (because it is something unique and was featured on the show).  I was more in a savory mood and ordered a hot chicken sandwich with cheese and peppers.  Anna enjoyed her creation and gives it three stars.  I wasn’t quite so lucky.  The sandwich was good, but they put too much cheese on it which overpowered the rest of the sandwich. 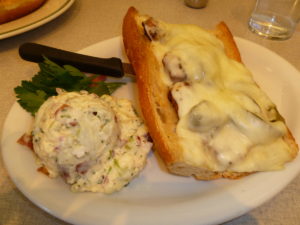 We would be happy to go back to Bette’s, but we’d have to get a better table.  On this day, it was just one of those situations where you feel as if you’re in the way and everyone is trying to squeeze by you and bump into you constantly.  That’s no way to enjoy a meal.  Anna had it worse than me.  I was up against the wall, but Anna was out in the thick of things.  Also, our table was pressed right up against a bussing tray/cart and it was not fun to watch that action.  Surprisingly enough, even though we were not more than six feet from the kitchen, our dishes did not come out together, and they were served by a runner. END_OF_DOCUMENT_TOKEN_TO_BE_REPLACED

We enjoyed a leisurely drive down Interstate 5, stopping for the night in Red Bluff, California (where we indulged in a King Arthur Supreme Pizza from the friendly crew at Round Table Pizza).

Although we were heading directly south for Sacramento, we decided on the fly to veer west for Winters, and the Putah Creek Café.  We arrived in Winters and enjoyed taking in the beautiful downtown area and finding a place to park.

It was late morning and we didn’t know if we were in the mood for a late breakfast or an early lunch.  We walked in to the Putah Creek Café and got a nice booth along the front.  The place is gorgeous inside, very inviting, tastefully decorated, and has a very large dining room adjacent to the booths in front.  Our waitress was friendly and answered all of our questions about Winters and the Putah Creek Café.  She was obviously very proud and we could see why. 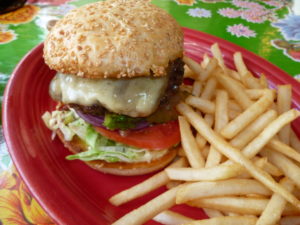 As for the meal question, it turns out that Tuesday is their buy one get one free burger special, which turned the question into a no-brainer for us (which is a good thing when you’re on the road).  We ordered a California Burger, which included jack cheese and avocado; and our second pick was a chili-size with the house made chili con carne.  We were hungry and both burgers hit the spot.  The fries and rings were good too.  In addition to all the good food and great service, they also have an old world style pizza oven out front (it’s mobile).  If I remember right, our waitress said they fire that up once a week or so and make some wood fired pizzas.  Winters may be a small little town, but the people who live there will not have to worry about finding a good place to eat.  There’s also a famous steak house across the street.  Winters is a little out of the way, but we’re glad we made the trip; and give the Putah Creek Café our highest recommendation. END_OF_DOCUMENT_TOKEN_TO_BE_REPLACED

We rolled out of Boise, taking the same route as before, and stopping to visit the same old friend in Moscow.  Unlike before, we didn’t cut through Pullman and head up the 195.  Instead, Jill took us through the Palouse Scenic Byway.  I didn’t like not knowing exactly where I was at, and I didn’t like slowing to a crawl for every little burg along the way; but, it was a beautiful drive.  I loved the pastoral countryside and marveled at all the agriculture. Washington is a very beautiful state and this was just one little slice of it.

Jill eventually put us back on the 195 and we rolled into Spokane just in time for dinner at Waddell’s Pub and Grille.  We didn’t make it to Waddell’s on our previous trip to Spokane, but figured that we probably didn’t miss anything special.  Boy were we wrong.  Waddell’s rocks.

They were packed and we had a short wait for a table.  I don’t know what their business was like before Guy Fieri rolled through, but they need to add on another dining room.  Waddell’s has one of the most impressive burger menu’s I’ve ever seen.  It’s on the net if you want to check it out.  We really wanted the nachos, but knew we’d be full before our burgers came.  Four people can split an order of nachos, but it’s usually too much food for two people.  We had a very difficult time trying to figure out what to order.  Anna has a penchant for the barbecue style burgers with the barbecue sauce and onion rings, so her decision was a little easier than mine. 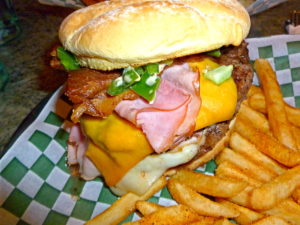 I ordered the Big Dog, which is two big hamburger patties, jalapenos, Zag sauce, cheddar cheese, bacon, grilled ham, pepper jack cheese and topped with an onion ring.  The “Zag” is an homage to nearby Gonzaga University, and the sauce is a special blend of marinade seasonings, BBQ sauce, hot sauce and mayonnaise.  This burger was featured on the show, and if you saw it, you’d want to order it too.  You can see from the picture that the burger is a masterpiece, and it was just as much fun to eat as it looks and sounds.  The fries were excellent too. END_OF_DOCUMENT_TOKEN_TO_BE_REPLACED