We left OKC the next morning and stopped in Amarillo to check out the Big Texan.  We had driven by it many times, but never stopped in.  If you haven’t been through there, this is the place that has the famous 72 ounce steak, which is free, if you can eat it in an hour or less (along with all the other sides).  It’s not something I would aspire to, but Anna wanted to stop and see it.  The place is really nice inside and they have a gift shop.  I notice on their menu that they accept gold and silver bullion for payment.  As we were leaving, a couple pulled in on a yellow Goldwing, and it looked like it could have been Roger and Jane Holm (which would have been the biggest and most amazing coincidence in the world).  It wasn’t Roger and Jane, but they were from Minneapolis (which is still an amazing coincidence).  I chatted with them about touring on the Goldwing, and they said they love it.

We finished the day’s drive and pulled into Santa Fe in time for dinner.  I had been looking forward to all the green chiles.  We hadn’t eaten all day and we were starving.  For part one of our dinner, we drove over to the Tune-Up Cafe.  Unfortunately I had run out of time when I was planning the trip and didn’t get a chance to watch the DDD episodes for New Mexico.  We we’re going to have to wing it.

The Tune-Up Cafe is a great little cafe which just went through an expansion.  They have a nice dining room in the front, a gorgeous bar off the back, and plenty of seating on the patio out front.  We got a cozy little deuce in the bar and drew a friendly waitress named Marquee.  We hit the jackpot with her because she is a total foodie, knows everyone in town, and is originally from Chicago.  So we had tons of stuff to talk about.  We ordered the green chile cheeseburger and a bowl of green chile beef stew.  She got us lined out for the Santa Fe tour. 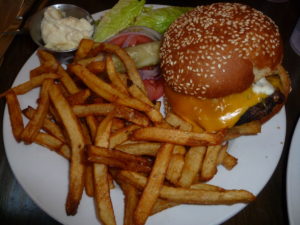 The food was outstanding.  The stew was rich and the flavors were very well developed and balanced with the heat of the chiles.  They make this dish with flank steak and it was melt in your mouth tender.  I thought for sure it was an all day affair, but other than the homemade beef stock, the chef says it only takes about two hours.  I couldn’t wait to get home and make some.  The burger was great too and cooked perfectly.  It was scrumptious and really hit the spot.  The fries were crispy crunchy delicious and went along well with the garlic aioli.  Part one of our dinner plans was a smashing success. 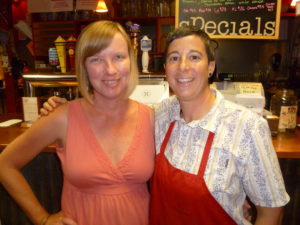 Anna and Piper at Back Road Pizza

Part two of our plan involved getting a pizza to go at Back Road Pizza.  We went inside and were lucky that there wasn’t a long line.  They have a very enticing menu and I had it narrowed down to two of their signatures pies.  The New Mexican features green chiles, red onion and pepperoni.  Yum.  But they also have my combo favorite which is called “Norm” and features house made sausage, pepperoni, mushrooms and black olives.  Tough choice.  I wanted to try them both.  The woman who took our order suggested that we get both on one pizza as a half and half.  Perfect.  That’s what we ordered and the woman happened to be the owner herself, Piper.  We chatted her up a bit and she was just as friendly as she could be.  She’s from Boston (where her parents still live) and so we raved about Sam LaGrassa’s Chipotle Honey Mustard Pastrami sandwich.

END_OF_DOCUMENT_TOKEN_TO_BE_REPLACED

We headed north out of Dallas and rolled up towards Oklahoma City.  We stopped short in a little town called Norman for our first destination.  The Diner is a quaint little restaurant in a charming little downtown area.  It’s a shotgun affair with an open kitchen on the right, booths on the left and a ten stool counter up the middle all disappearing towards the back.  The place has a lot of character and as well it should since the building is over 100 years old.  It was built in 1892 and was formerly a chili parlor.  Unlike other older restaurants that are small and tight, this one has a clearly defined walk-way/aisle up the middle.  There’s no clashing of faces, elbows and cabooses. END_OF_DOCUMENT_TOKEN_TO_BE_REPLACED

It was dark by the time we rolled into Dallas, and since we had a little food with us already, we just went straight to my friend’s house.  We planned to be in Dallas for nearly a week, and it would take that long to get to all the places we planned to eat at (about 20). 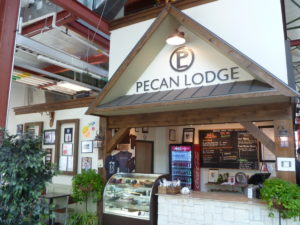 On our first day in Dallas we drove to the Dallas Farmers Market for an early lunch at Pecan Lodge.  I had a cunning plan to arrive early, check out the market, and then saunter over to the Pecan Lodge about 11:00 am.  Right.  We got there about 10:15 and there was already a line! We got in it and started the long wait.  The time went by fast because we started a friendly chat with the people in front of us.  They were locals, but it was their first visit too.  We met another guy too, who recommended a burger place in Fort Worth (that turned out to be gold). END_OF_DOCUMENT_TOKEN_TO_BE_REPLACED

We arrived in Houston and found a nice place to settle in for three nights.  After unloading the car and relaxing for a bit, we set out for a snick-snack at the Red Lion Pub, followed by dinner at Niko Niko’s.

I’ve not been to England, but the Red Lion Pub transported me across the pond and it was easy to imagine being in England.  As pubs go, this place is upscale for sure.  It’s spacious with lots of dark woods, leather, great ambiance, and bawdy artwork in the loos. 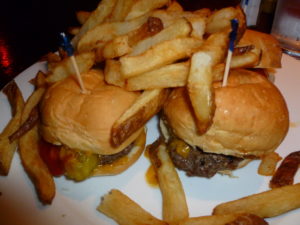 They were running a half price special on their cheeseburger sliders, so we didn’t have to give much thought to what we were going to eat.  I glanced over the rest of the menu, and you will find all the pub classics.  We drew a friendly waitress and she took good care of us.  The food was fabulous and tasted even better than it looks in the pictures.  Even though it was pub grub going out for half price, we could tell that the sliders were prepared with meticulous attention to detail (which means a lot to me).  The flavors were great, and they were succulent and hot.  It was much more than I was expecting, so we were delighted.  I was sorry that we couldn’t have tried more of the traditional fare, and if I had to venture a guess, I’d say that all the food is probably top notch.  There’s four sliders by the way.  The picture does not do the food justice, but it’s clever to put the fries over the top of the sliders and help keep them hot. END_OF_DOCUMENT_TOKEN_TO_BE_REPLACED

We started our first day in Austin north of town at the Monument Cafe in Georgetown.  The first thing I noticed was how big the place is.  It has one of the biggest dining rooms I have ever seen, and was told the capacity is 242, all in one room.  The place is completely open, including the kitchen.  It’s Texas-sized.

We had a full day of stuffing our faces planned, so we decided to share one breakfast of Eggs Benedict.  That left room for us to sample a breakfast taco while we were at it.  Our waitress wasn’t personable at all and we never did get her name.  I suspect she was either preoccupied or just having a bad day.  She was pretty good about tending to our table and she did bring out our food, but she ordered it as a split plate for us (which we hadn’t asked for).  No big deal, other than trying to get a decent photo, but the hash browns got cold.  She jumped to the rescue and immediately brought us out a hot and satisfying plate full of GBD hash browns (which turned out to be the star of the show).  The hash browns hit all the right buttons… hot, crispy, crunchy, salty, creamy, and a deep flavor that can only come from cooking them old school. 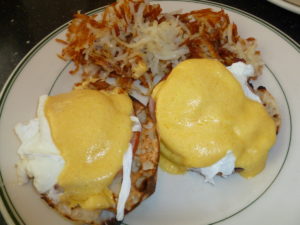 The Eggs Benedict were not quite as satisfying, but they were good.  I enjoyed mine more than Anna did hers.  I’m learning now that it’s easy to assemble an Eggs Benedict, but it’s hard to bring it all together as a cohesive luxurious dish.  I gave the dish a seven out of ten, and Anna gave it a five.  We were comparing notes on the way to the next place, and it was like we had two different orders of Eggs Benedict.  As I mentioned a while back, Hob Nob Hill in San Diego has really set the bar for Eggs Benedict done right, and we now have high expectations that we carry with us wherever we roam. END_OF_DOCUMENT_TOKEN_TO_BE_REPLACED