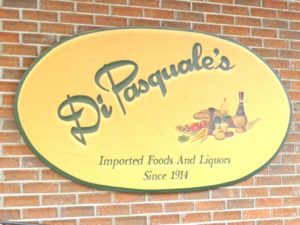 Other than the DDD spots, we really didn’t have much planned for Baltimore.  Our first destination was Di Pasquale’s.  Jill turned us down an alley to get there and I thought for sure we would not be able to park the car.  Wrong.  We got to park right in front.  They have a nice store full of imported everything, a deli case, and seating in the back.  We ordered an Italian cold cut sandwich for later, and we split an order of the lasagna, which they had made on the show.  It was fabulous.  I was so glad that Anna was getting her appetite back because if would have been tragic to miss that lasagna.  The sandwich was great too, and the staff was accommodating.  They’re coming up on 100 years in business, so they must be doing something right. 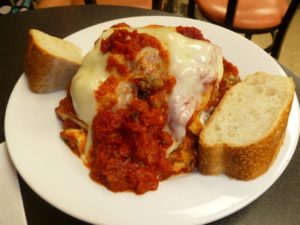 We went to the historical district and visited the Oxford Club on West Monument Street.  It was my first time there, and I enjoyed the experience as well as the historical architecture.  Afterwards, we drove out to Fort McHenry, which is the site that inspired the Star Spangled Banner.  (Note: The picture of the lasagna doesn’t begin to do it justice.  This lasagna put Di Pasquale’s into Ken’s Top Tens for authentic Italian food done right.) 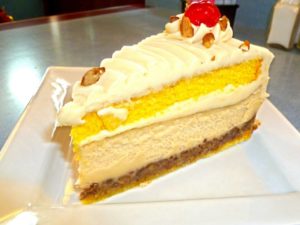 We headed out to the Broadway Diner for a snack.  They had an enormous bakery case and I told Anna just to order whatever she wanted.  She came back to the table and informed me that she ordered a slice of Butterscotch Pecan Cheesecake.  What’s not to love about that?  I didn’t have any idea what it was, but it became clear when our server brought it to the table.  Yes, this is buttercream frosting, on top of cake, which is on top of cheesecake, on top of pecan pie, on top of a graham cracker crust.

You might take one look at this concoction and think it would be way too sweet.  Unh-uh.  It was juuust right.  The flavor combinations were sublime, and I think it is one of the most delicious and original desserts I have ever had the pleasure of eating.  We should have ordered two more pieces, but we had other places to visit. 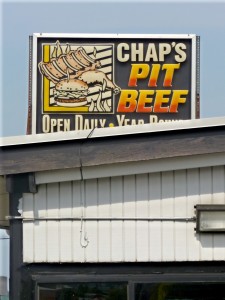 Our last stop for the day was Chap’s Pit Beef.  The smoke billowing out of that open pit beckons meat lovers like a siren song.  What a great place to put a strip club (which somebody already thought of).  The staff was friendly and we ordered a humongous Pit Beef Sandwich with a sausage and the horseradish cream sauce.  In true carnivore style, we devoured it on the spot, standing up at the counter, and it was just as good as you would imagine it.  (Add Tim Allen grunts here.)  Although the wait wasn’t very long, the smells and the smoke wafting out of the kitchen were driving me wild. I was so giddy with excitement  by the time we got our sandwich, I forgot to take pictures.  I’m sad too.  I don’t know if I’ll ever make it back to Baltimore, but if I do, I will return to Chap’s for sure; stay longer next time, and maybe enjoy the sights across the parking lot. 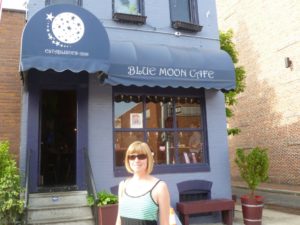 The next morning held one of our most anticipated spots… the Blue Moon Café.  Sarah Simington is the woman who came up with the Cap’n Crunch french toast, and the sausage biscuit roll-up (which she also made on Guy’s Big Bite).   Don’t ask me why, but her segment with Guy is one of my favorites, and I just felt a strong connection with her.  We arrived during a lull in the busy morning service, and got to park right out front.  We took some pictures and then walked in.  We were greeted at the door by none other than Sarah herself, and I was shocked to see her like that.  All I could manage to get out was, “It’s you!” 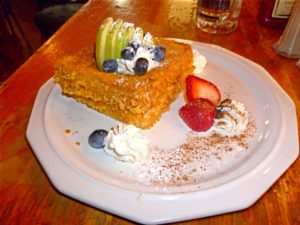 It was her, and she looked great.  The café was charming and I don’t think she was exaggerating when she said that her patrons are like having guests in her own living room.  She was very cordial to us and her service was impeccable.  It was so good, it was like she was putting on a clinic.  Anna ordered the french toast and I ordered the biscuits and gravy with scrambled eggs and hash browns.  Real hash browns.  Sadly, the sausage roll was not available.  I told Sarah that it was such an inspired creation that I made it myself at home.  I don’t know what I did wrong, but the biscuit dough overpowered the other ingredients.  If you haven’t seen the sausage roll, you’ve got to see it.  It’s even more inspired than the french toast.  While we waited for our food, the place got slammed again and I got to watch Sarah doing what she does best.  It was very impressive, as was our breakfast when it came out.  The french toast was amazing, and I wish we would have ordered a full order (three pieces instead of two).  My breakfast was and still is one of the best I’ve ever had anywhere. 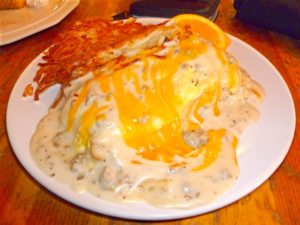 Biscuits and Sausage Gravy Breakfast,
cooked to perfection and served with a smile at
the Blue Moon Cafe in Fells Point, Maryland

Sarah had asked us if we’d like to try her cinnamon rolls.  Of course we did, but we didn’t want to spoil our appetite for breakfast, and then afterwards we were too full.  Sarah was gracious enough to pose for a picture with us, and then as we paid the check and were getting ready to leave, she gave us a free cinnamon roll to take with us and a free magnet (which we proudly have on the highest position on our fridge).  It was just a complete and totally delightful experience and I can’t say enough good things about Sarah (Gold Dust Woman) and the Blue Moon Café.  Check out her website.  I think we can safely add Queen of Comfort Food to her list of accolades.

Sarah and Celeste Shaw (Chaps Girl) have a few things in common.  They’re two of our absolute favorite women from DDD, with two of our favorite restaurants.  They both have treated us like gold, and made us feel super special.  Another thing they have in common (sadly for us) is that they are virtually impossible to get in contact with.  I wanted to put Sarah’s picture here, but I was never able to get in touch with her.

Just around the block from Sarah’s place is Brick Oven Pizza.  We arrived there later that day for lunch, but the stars just didn’t line up for us.  We didn’t have any problems.  We just weren’t ready to have pizza again yet.

We drove over to G&A Restaurant and sampled one of their chili dogs (which looked pretty good on the show).  Turns out that it was a different kind of chili than what I am used to out on the west coast (which I would discover again in Cincinnati).  Out here our chili uses a lot of chiles, cumin and maybe a little Mexican oregano.  It’s spicy, but not very herbaceous.  I thought the chili at G&A was very herbaceous and I didn’t care for it.  I’m sure the hot dogs are good.

Maybe we were still a little tentative from the Washington DC experience, and the huge breakfast that I had at Sarah’s kept me full all day.  I would definitely look forward to trying the pizzas at Brick Oven Pizza, and the rest of the menu at G&A Restaurant.

Baltimore sure is an historic old town.  Anna read that Edgar Allen Poe is buried in one of the cemeteries there.  I thought it would give us something to do to go find it, but it seems like they have a huge cemetery every other mile or so.  We never did find his.

We also wanted to sample the wares at Dangerously Delicious Pies, which has also been featured on the Food Network.  It seemed to be closed, or out of business; and I don’t know if it has reopened or not.

All in all, we had a great time.