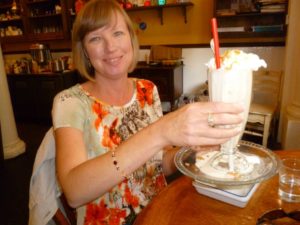 I’ve passed through Portland, Oregon many times in my life, but never spent any time there to speak of, and certainly not for the food.  That was all about to change. Portland was now a destination and we were looking forward to having some great food and meeting new people.  Besides food, I just love to have fun and go on adventures; and Portland is just as good a place as any other to go exploring.  Portland is fast becoming known as a foodie destination, and we were happy to get in on the action and check out the local offerings.  We were rewarded handily. 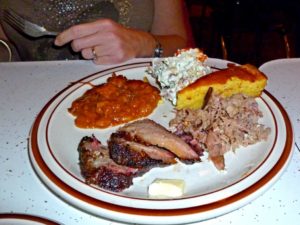 Combo Platter at Podnah’s Pit
(after we split the plate)

Anna and I had spent the day touring Astoria, the Lewis & Clark museum and the Tillamook Cheese factory.  By the time we rolled into Portland, it was dark and the traffic was heavy.  We still didn’t have GPS and it was no easy feat to navigate ourselves over to Podnah’s Pit for dinner.  It was worth the trouble though because it was some of the best barbeque we’ve ever had (and still is).  We started with a Frito Pie and then shared a combo plate of brisket, pulled pork, baked beans, cole slaw and cornbread.  (The picture is a split plate)  It’s hard to imagine getting Q that good outside of the South, but they’re doing it right.  Podnah’s Pit gets our highest marks.  Great atmosphere and excellent service.  If you can save room for dessert, they have Pecan Pie (and with a dessert that good, that’s all they need on the menu).  We didn’t save room for the pie, but we will make a better effort next time. 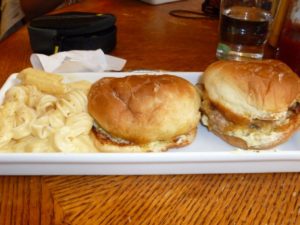 As if Podnah’s Pit wasn’t enough of a treat, we were absolutely delighted when we arrived the next day at the Blue Plate Lunch Counter.  I ordered the sliders from the show (with Tillamook cheddar, bacon and basil mayo) and Anna ordered the grilled cheese with tomato soup combo.  The sliders were right on the money, hot and juicy.  It’s not the best picture of burgers that I’ve ever taken, but don’t let that throw you off.  These sliders are some of the best cheeseburgers I’ve ever had the pleasure to shove in my mouth. Being a soda fountain, we also ordered a pair of milk shakes and they were to die for.  Anna ordered a chocolate malted and I ordered a butterscotch.  Crazy good.  It’s a good thing we spent the rest of the day walking around downtown Portland (except for the hour that we waited in line at Voodoo Donuts…Shhh). 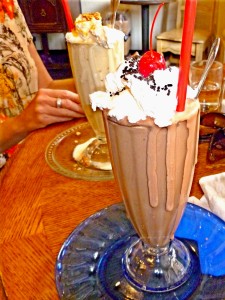 The next morning we popped over to Pine State Biscuits for breakfast. I ordered the Reggie chicken sandwich from the show, but it wasn’t really my bag.  The place was small, packed and super busy/crowded (also not my bag).  We could barely make heads or tails out of the menu.  All Anna wanted was a biscuit with butter and jelly; couldn’t find it. I picked up someone else’s order by mistake (a biscuit with mushroom gravy instead of a biscuit with sausage gravy), and then I was upset that they got my order wrong.  Clint Eastwood had an expression for it in the movie Heartbreak Ridge.  Besides, who in their right mind would want mushroom gravy for breakfast when they can have sausage gravy? It was too crowded to break out the camera.  It seemed I was butting heads or elbows everywhere I turned.  The biscuits were exceptionally good however, and the staff did their best to make me happy.  I will give them credit for that.

We drove over to Bunk Sandwiches for lunch.  I ordered the pork belly Cubano and it was an experience.  I was so excited, I forgot to take pictures.  It’s a good thing I live a thousand miles away from Portland, or you’d have to roll me out of there.  I managed to get Anna to order the Italian Meats sandwich so I could sample that one too.  Bunk was one of our first experiences with artisan type, hand-crafted food and it was so much better than ordinary food that we are changed forever.  We could never go back to being happy with ordinary sandwiches.  I’ve never had a better Cubano since, and doubt that I ever will.  Bunk opened a second place (Bunk Bar), with a bar, a deep-fat fryer and later hours. 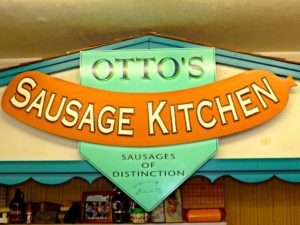 A little bit later we arrived at Otto’s Sausage Kitchen.  We looked at all their wares and wished we could have eaten a full meal.  They had a grill working out front with the irresistible smells of smoked meats wafting all the way down the block where we parked.   We managed to split a hot dog, but that was all we had room for.  The staff was friendly and it looks like a great place to buy meat.  They also have a fantastic selection of deli and specialty food items.  I was very impressed (and sad that we weren’t hungry). 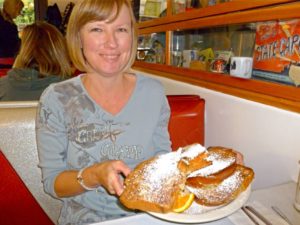 We managed to drive downtown on our last morning to have breakfast at the Byways Café.  It was a nice little café and Anna was tickled with her gigantic order of Amaretto Hazelnut French Toast with maple pecan butter and syrup.  I was able to help her with it after I had an omelet.  It’s a good thing we were both stuffed because the German Chocolate cake looked sinfully good.  You be the judge.  (Of course, we would never have chocolate cake for breakfast.)  The service was good and the coffee was excellent.  The place was full of knick-knacks and old world charm. The atmosphere was busy, but relaxed. 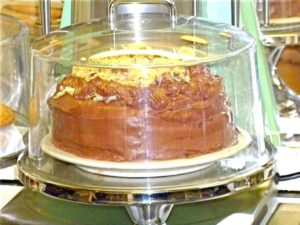 All in all, Portland is a food lover’s Mecca.  I’m sure we barely scratched the surface, but after a few weeks up in the Great Pacific Northwest, we were ready to head south and get back to California. 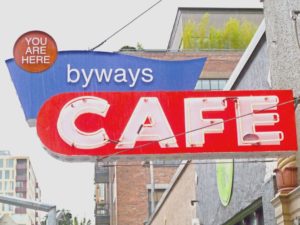