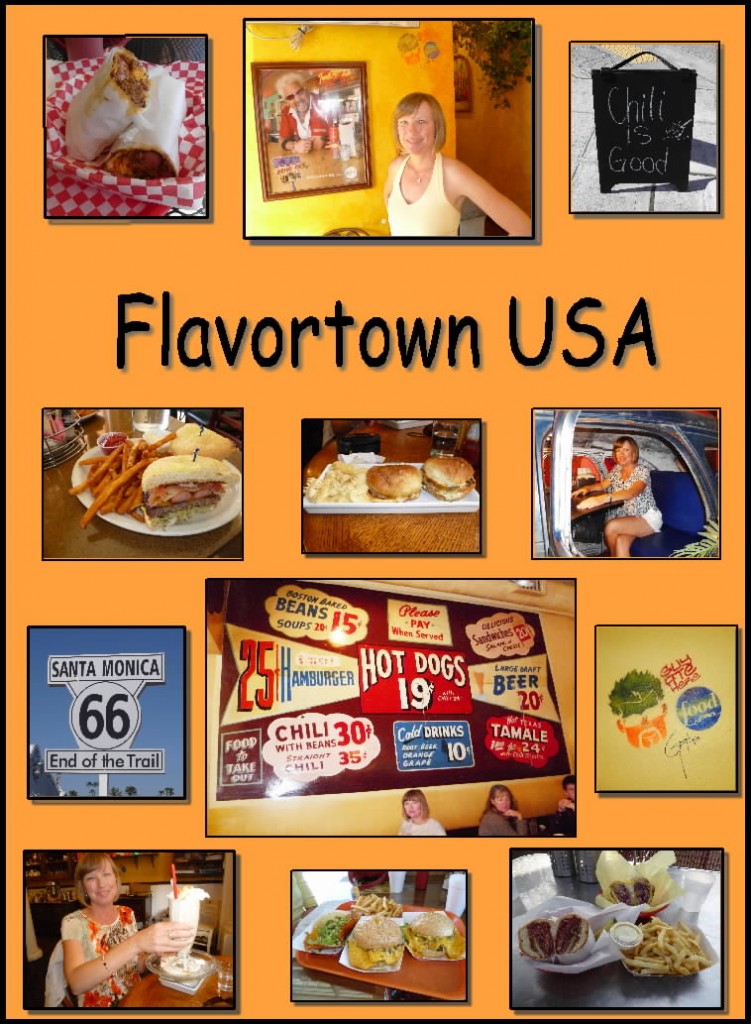 The first 261 places we have reached so far were divided out over the course of two years and nine different road trips spanning from points as far wide as Seattle, Portland, Maine, San Diego, Memphis, Minneapolis, and Houston, Texas.  We’re hoping to tour the Gulf Coast next spring.  We’re also hoping to squeeze in a short trip to San Francisco and the wine country.  I just can’t wait to try the Chain Gang Chili at Jimtown Store, and the Ravioli with Garlic Butter Sauce at Catelli’s.  This image is the cover I made for our travel binder, which I put together right before the big cross country trip.  Those were some of our favorite photos and the binder has seen a lot of miles and cheap motel rooms.

All the trips were made in our trusty steed, a 1998 Lexus LS 400, that has almost 250,000 miles on it (but still looks and drives great).  Other than flying low, there were no airplanes involved. We started out with maps, worked our way up to GPS (American English – Jill), and eventually smart phones.

Of the 261 places, we didn’t eat at all of them.  I want to confess that up front. Some places were closed (5), and some others we walked out of (10).  I’d rather not say anything bad or negative about anyone, but I have to be honest.  I’ll be writing all the blogs, but my intrepid sidekick (Anna) took all the notes and I refer to her often for remembering all the details.  Every place we went to, we went together. I took the pictures (when I remembered).  Anna helped navigate and I did all the driving (and most of the cussing).

We were in the middle of building our house.  Anna and I were combing the racks of DVDs at Target when I noticed the first three seasons of Diners, Drive-Ins & Dives (which we had never heard of).  I don’t know when the show premiered, but we didn’t have television for over three years—following our move to the mountains (July 2006) and the building of our house.  Coincidentally, we had watched Guy Fieri win The Next Food Network Star and a few of the first episodes of Guy’s Big Bite (right before we relocated).  It took us a while to warm up to him, but we were happy that he won (beating out some stiff competition).  Ordinarily you wouldn’t expect a person with such a big personality to be so down to earth.

Although we didn’t have TV service, we do like to watch movies and DVDs.  I said, “Let’s get the First Season and if we like it we can come back and buy the other two.”  The rest is history.  We both fell in love with the show immediately.  We watched the episodes over and over and showed our favorites to our friends.  Out here in the boondocks we got a lot of mileage out of showing people the Squeeze Inn cheeseburgers, the deep fried pickles at the Penguin Drive-In, the Garbage Plate at Frank’s Diner, the Stromboli at the Four Kegs, and so on.  It didn’t take long to figure out that we’d like to visit a lot of those places, savor the food and meet the people.

We bought the 2nd and 3rd seasons, and later the 4th.  We moved into our house in October of 2009 and started cable TV service in December.  It took quite a bit of digging to figure out how many episodes there were and which ones we didn’t have.  Since we’ve been in the house, I’ve managed to record every episode of DDD; and since there are so many to keep track of, I’ve had to write them all down.  As far as I know, I’ve got every episode’s name, places and the featured food/people.  I know I won’t get to them all, and some are no longer in business (sadly), but I have thoroughly enjoyed watching every single episode (two or three times at least).

I could be off a little, but by my count there have been 192 regular episodes so far and four specials (through the end of Season 15).  I’ve not counted up the number of places but it must be somewhere in the neighborhood of 500 and change pushing 600 (and still going strong).  I’m sure some fans are keeping better track than I am and will help me keep accurate numbers.

We’ve had television in our new house for almost three years now, and we watch the Food Network just about every day.  But, we haven’t had Internet service.  We’ve been taking trips, keeping meticulous notes and taking lots of pictures; and now we’ve got TV, tons of DDD outings to write about and Internet service.

We’ve been under the radar all this time, but I’ve always intended to write about DDD just as soon as we got Internet service (welcome to the 21st Century).  I already know the best of the best (and the worst), but I want to take it back to the beginning and tell the stories in the order that they happened.

Look for the long list of cities beginning with “First Day” and settle in for some fun.  There’s over 400 pictures, and a few of them are actually good.  Needless to say, I won’t be winning any photography awards.  We welcome your comments and invite you to share your DDD experiences with the rest of us fans.