April 2011:  This is the trip that put us into the Big Time as serious DDD fans.  We went on the road for seven weeks and went to over a hundred DDD places; going as far as Portland, Maine.  It was a trip of a lifetime; and there were so many places to see and things to do, that it took over a month just to plan the trip.  As usual, we had family and friends to visit along the way.

We bought a GPS, and preloaded all of our destinations into it (it worked perfectly).  It was amazing actually.  By the way, driving on the east coast is a lot different from the west coast.  Even with the GPS, I made several aggressive lane changes and more than a few illegal turns just to negotiate the toll booths and busy surface streets with no left turns (craazeee).  It was entertaining and a bit harrowing at times, but no harm done.  I got the finger a few times, but I can get that just for having California plates.  I’m sure Anna was relieved that she didn’t have to navigate (although she is a real heads-up passenger).  She keeps her eyes out for critters, cops, pile-ups, rest areas, coffee stands, taco trucks, adult superstores, aluminum cans and loose change.  She also helps spot our destinations as we roll up on them.

My family hails from the South.  Western Kentucky to be precise, centered out of the Princeton area.  I’ve been visiting there on trips my whole life.  We would go every three or four years or so and stay for a week or two.  We had been enjoying our DDD trips so far, and I conceived of the idea that as long as we were going to be as far east as Kentucky, why don’t we drive all the way to Maine and see the rest of the country that we’ve never been to.  We’d been up the east coast, but only as far as Washington, DC.

I wanted to go to New York City; see the real Statue of Liberty (instead of the one in Las Vegas); go to Philadelphia and put in my two cents worth on the raging battle between Gino’s and Pat’s; and the food war between Al’s Italian Beef and Mr. Beef in Chicago; go to Niagara Falls, and the Rock and Roll Hall of Fame in Cleveland.  I could go on and on here, but I’ll save it for later.

As I conceived of the trip, it was an opportunity to see the rest of this beautiful country that I’d not seen yet.  It was a chance to see a lot of the historical sights and places, like the Liberty Bell, Independence Hall and Lexington Green.  The DDD spots were like icing on the cake (or gravy if you’re more in a savory mood). 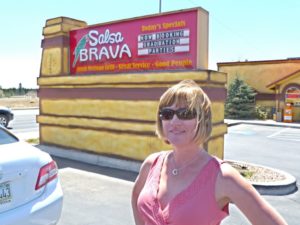 Our first leg was from home to Mississippi (almost 2,000 miles).  We planned a few stops along the way, with the first being at Salsa Brava in Flagstaff, Arizona.  We arrived just in time for lunch and the food was fabulous.  The place is big and the service was top-notch.  They had a salsa bar, which I enjoyed immensely.  We were actually starving to death (500 mile drive so far) and wanted to eat big (but we were also planning to go to Brandy’s Restaurant & Bakery). 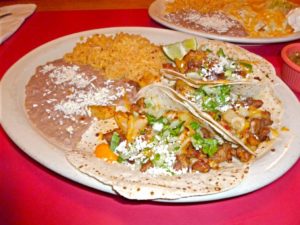 I ordered the Maui fish tacos with pineapple salsa, and Anna ordered the chicken enchiladas with the chipotle cream sauce (we usually share everything).  The food was superb and my only regret was that we couldn’t have eaten more.  If you’re ever on the I-40 in Arizona, stop in at Salsa Brava and you’ll be glad you did.  Top marks.  The food was so good, I bet I could have eaten both lunches.  Salsa Brava is our new favorite spot in Flagstaff.

We drove up to Brandy’s and stopped to fill up the car.  My phone rang and in an amazing coincidence, it was Celeste Shaw (from Chaps) calling to thank me for the letter we had sent her back in October.  It was great to hear from her, and it turns out that in addition to owning and running Chaps, she is also a trauma nurse on a helicopter flight crew, and is raising three boys.  The woman should have a cape.  She’s got the physique of a superhero to match, but I digress.

Our grand plan was to pop into Brandy’s and grab something from the bakery to go.  We went in and I left Anna at the bakery case up front while I went to the back to wash the gas station off my hands.  When I got back to the front, Anna was still waiting to be helped.  There wasn’t any line when I left her, so I didn’t understand what was taking so long.  No one offered to come and help us, and when a young woman finally did come up to the front, she ignored us, took a phone call and left us standing there.  We walked out.  At least I got to wash my hands.  Whatever was left in the case that late in the day didn’t look all that good anyway.

We piled back into the car and set out for Albuquerque (another 320 miles down the road).  We arrived no problem and promptly let Jill (our GPS) guide us into dinner at Cecelia’s Café.  We headed into Old Town and everything was going perfect, until we arrived at Cecelia’s.  It was closed!  Turns out that they always close by 3:00 pm and I just assumed they were open for dinner.  Poor assumption of course.  There we were in Old Town Albuquerque and no back-up plan.  We didn’t have smart phones yet, and I hadn’t written down any of the other places (like an idiot).  I couldn’t remember what else was there (besides the steakhouse), and didn’t know where any of them were at anyway.  I had a list of every place, with addresses, printed up; but I left it at home because we brought the GPS.  It was still only our first day.  Yes, I was I feeling particularly stupid. 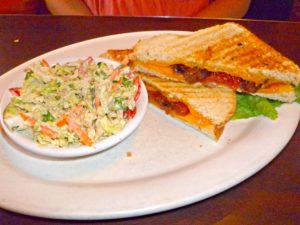 To make a long story short, we drove around for a few minutes until we found a popular Internet café (not that we had a computer with us or anything).  I just walked up to a unsuspecting attractive young woman sitting alone and asked her if I could look something up on her computer.  She probably thought I was nuts, but she was gracious about it and let me have a go at it.  Turns out we were close to The Standard Diner, and they were open.  I didn’t get her name, but thanks again. 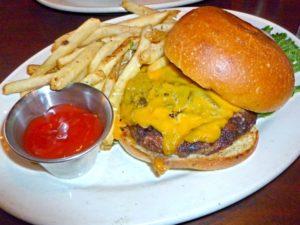 Green Chile Burger with Fries
at The Standard Diner

The Standard Diner was gorgeous.  It’s a huge place which is a converted gas station and repair garage.  It had been decorated to the nth degree, with high ceilings and exposed beams.  I ordered a cheeseburger (no surprise there right?) with the famous New Mexico hatch chiles, and Anna ordered a grilled cheese sandwich with smoked cheddar, sun-dried tomatoes and basil aioli.  The food was pretty good, but it had been run out to us by a runner, and our waiter never came back to check on us.  I was waiting for mayonnaise and my burger got cold.  I ate it anyway, but it could have been better. 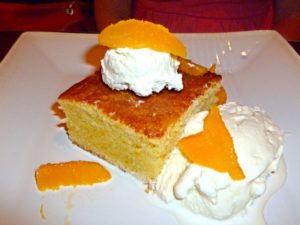 The manager, Jeffery, was apologetic for the mix-up and had his pastry chef whip us up a little dessert.  He served it to us as well, and we didn’t know what to make of it.  We didn’t recognize it as a dessert, but we dug into it anyway.  Turns out it was an olive oil cake, which we have never heard of, much less seen.  It was scrumptious, super moist, and not too sweet.  We loved it, and left quite happy.  We pushed on and stopped for the night in Tucumcari (which logged us about 1,000 miles drive for the day).

We slept like the dead and I woke up in one of those “where the hell am I?” kind of a fog.  After having missed Cecelia’s, I got to thinking about Nic’s Grill in Oklahoma City and what time he closes.  The first time I saw the footage of the onion cheeseburger, I was transfixed.  It’s still one of the best looking cheeseburgers ever to appear on television.  Anyway, I forgot to allow for the time zone changes and by my best guess, we couldn’t get to Nic’s until at least an hour after he closes.  It would have ruined the whole trip for me, and it was only the second day.

By the time we made it back on the road and into Texas, I came up with the plan to call Nic’s and ask if they would make a cheeseburger for me and leave it with a neighboring business, and that I would leave the cash for it.  It was the best I could do.  But, they weren’t answering the phone.  After we crossed into Oklahoma, I finally got someone on the phone and explained my situation.  They close at two, and I said I would be arriving about 3:15 to 3:30.  Instead of leaving a burger, they offered to just wait for me.  Awesome.  I hate to put anyone out, but I really wanted that cheeseburger. 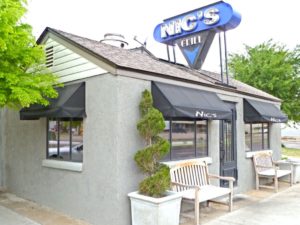 The owner, Justin, was waiting for me and I sure was happy to see him.  The place was small, but it was just as inviting as it looked on the show.  Justin was very gracious and it was a pleasure to meet him.  He handed me the big Styrofoam box and the first thing I noticed was how heavy it was (which made me smile).  I opened it up and laid my eyes on that gigantic glorious burger.  I didn’t know it would be so big.  As I went to reach for my wallet, Justin waived me off and said the burger was his treat!  I was shocked.  Why on earth would he not let me pay him, especially after he waited around so long?  He explained to me that the burgers are good right when they come off the griddle; but after they’ve sat and cooled off then they’re not fit to eat.  I was really moved by his generosity, and tried to pay him anyway, but he was adamant.  I think the exchange transcended money, and I didn’t want to cheapen it.  We both knew that what was really going on here is sharing the love of a hand-crafted onion cheeseburger, which may be the finest of its kind in the world.

I haven’t been back to Nic’s yet, but I wrote Justin a letter and offered to have him join us for dinner at the Cattlemen’s Steakhouse the next time we get to town.  I didn’t hear back from him.  But, I have promised myself to make it a priority to arrive at Nic’s for lunch, on a Thursday (for the Fried Chicken special), suitably hungry, and on time.  I’ll be leaving a big tip.

I enjoyed the burger immensely.

We drove over to Leo’s BBQ Factory and ordered some brisket and coleslaw, which were good.  The sauce was excellent.  The main thing we went there for was the famous Strawberry Banana Cake, which we shared.  Anna loved the cake.

We left downtown and headed for Ingrid’s Bakery and Café.  The place was huge and the staff was friendly.  They allowed us to sample some of their meats and salads, and we put in an order for two sandwiches and two salads (a pea salad and a broccoli salad).  The first sandwich was cold cuts with turkey and salami, and the second one featured their house made meatloaf.  We enjoyed all of it.

We left OKC and headed for Arkansas and a stop for the night.