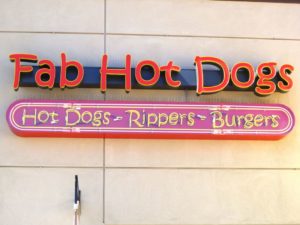 We live just a few hours north of Los Angeles, but hardly ever go there anymore (if we can help it).  We figured it must have been ten years since we were there last (although we used to go fairly often).  That’s where the DDD spots are at, and so off we went.  We only planned to hit a few spots and stay for a couple of days.  Turns out Anna and I had never been to Disneyland together, so we were due for a trip to the magic kingdom. 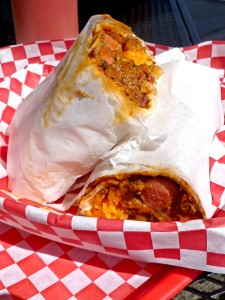 We jumped off the 405 near Reseda and made a beeline for Fab Hot Dogs.  On their episode, they made chili from scratch and then used it on a Texas Burrito Dog (which is exactly what we ordered).  As you can see from the picture, it is an inspired creation of grilled hot dogs smothered in chili, topped with cheese, onions, bacon and corn chips, then wrapped up in a tortilla and grilled.  I’m happy to tell you it tasted just as good as it looks and I’ll be having it again next time I get to town.  We split the dog because we had to save room for our next stop.  Fab Hot Dogs has an impressive menu, and some of the best dogs you’ll find anywhere.  It’s a good thing I don’t live anywhere close. 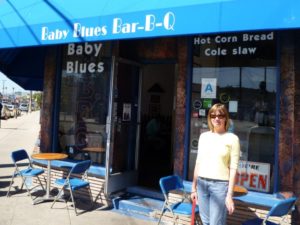 We tooled into Venice Beach and managed to park within a few blocks of Baby Blues BBQ.  The place was packed and we had to wait for a table.  Not too long.  We ordered a platter with pulled pork, brisket, mac & cheese, coleslaw and cornbread.  We also ordered the grilled corn on the cob with the chipotle/poblano butter.  The food was alright, but I ended up disappointed because my expectations were so high.  I did have fun sampling the different sauces, including the hot one (XXX) they made on the show (which was excellent).  The service was passable, but we weren’t feeling the love.  By contrast, the manager was very friendly and insisted we have a serving of their delicious banana pudding on the house.  Loved it.  I would be happy to go back (but next time I will try the ribs and sausage).

We spent the afternoon on the beach and Santa Monica Pier before heading into Manhattan Beach and the North End Café.  Sadly, we missed the owner, but the service was great.  We had an order of the pulled pork egg rolls from the show and they were fabulous.  The service was top notch.  It was too bad we couldn’t have enjoyed a full meal, but we still had to drive all the way over to Anaheim and get a room for the night.

After we got settled in and had a chance to unwind from the bumper to bumper traffic, we headed back out for Momma Cozza’s.  If Guy enjoyed the food there, we’re happy for him.

We spent the whole next day at Disneyland, which was just as much fun as ever.  The fireworks show was the most spectacular I had ever seen.  It was about $75.00 each to get in, which seemed sky high to me.  By the end of the day, it seemed like a bargain.   Sadly, we didn’t get to see any of the princesses (or other characters for that matter).  We were on our feet for about 14 hours, so we we’re pretty exhausted by the end of the night. 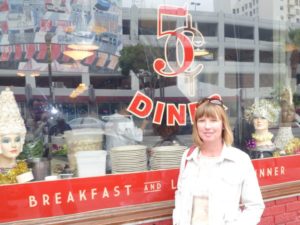 Anna in front of Nickel Diner

We got a good night’s sleep and then fought our way through the gnarly traffic to get down town to the Nickel Diner.  We took a turn through the Grand Central Market, and were saddened to see Los Angeles so run down looking, if not downright seedy.  There was a big selection of foods being offered, but the place looked decrepit and filthy. Could just be a coincidence that it looked like all foreigners. 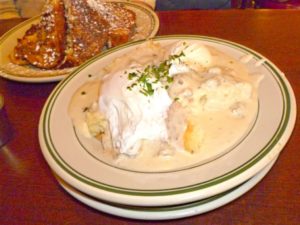 Our breakfast at the Nickel Diner

The Diner was a welcome sight and we got a good table right up front where we could watch the open kitchen.  It’s fun to watch a short-order cook running a breakfast service on a griddle.  The place was just as charming as it looked on the show.  Packed too.  Anna ordered the cinnamon brioche french toast and I ordered the biscuits and gravy.  That was all well and good, but what we were really there for were the famous maple and bacon doughnuts.  We were giddy with the anticipation which had been a long time coming.  Unfortunately, the doughnuts didn’t turn out anywhere near like what we expected, and we were both disappointed because they looked so good on the show.  It wasn’t until much later that we deduced what happened.  Our server must have put them in the microwave, because the glaze was melted off and the donut was tough.  I’m sure she meant well, but she ruined them.  I don’t know if we’ll ever make it back to the Nickel Diner, but the doughnuts still look great on the show.  I’ve got a tremendous amount of respect for the hand craftsmanship.  So, try the doughnut anyway, just make sure it doesn’t get nuked. 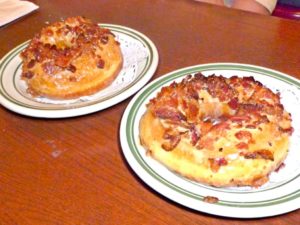 We left downtown and headed for Hollywood, and the Farmer’s Market.  It was my first time and we had a blast.  We bought some spice rub, gourmet dog treats, and sampled some candy and ice cream.  It was so much fun to see all the high end ingredients being cooked to perfection.

We headed east for MacArthur Park, which is across the street from Langer’s Deli.  I wanted to try the famous #19 pastrami sandwich, but there wasn’t any good parking and the park was full of homeless people.  It was a sad sight to see.  We didn’t stop, although I still plan to make it back someday. 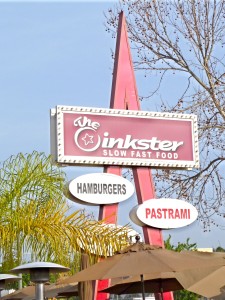 We headed up towards Pasadena and struck out for the Oinkster, and their famous pastrami.  The big A-frame structure was a welcome sight, and had parking on both sides and a nice patio out front.  We ordered two of Anna’s favorites: a pastrami sandwich, a pulled pork sandwich (and an order of fries).  The sandwiches were great and we had fun with the homemade chipotle ketchup and the garlic aioli.  We enjoyed the outside air and the weather was perfect.

That wrapped up a three-day trip for us and we headed home.  There are tons of other great places to eat in LA, but we would have to save them for next time.  I think the food I most enjoyed on the whole trip was the Texas Burrito Dog at Fab Hot Dogs.  I’ve tried to make them at home a few times, but keep coming up short in the flavor department.  It looks deceptively simple, but I think the real key is the chili.  I’m going to pay a lot more attention to that the next time I am there. 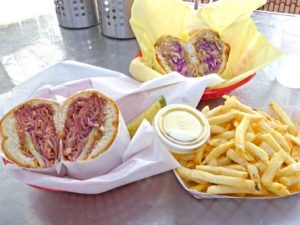 We left some really stand-out places unvisited such as Schooner or Later, Gaffey Street Diner and Patrick’s Road House.  But, we also knew that we’d be heading to San Diego (Hodad’s) in the near future and that we would come back through LA on our way home.  I can tell you right now, Hodad’s was one of our most anticipated DDD spots ever.  It’s amazing that we waited as long as we did.