After visiting an old friend in Moscow, Idaho, we arrived in Spokane in time for dinner.  We chose Hill’s Restaurant and settled in for some haute cuisine.  We didn’t get to meet the chef, but we did get to meet his brother and co-owner (who was tending bar).  At this point in time, DDD had filmed about six or seven restaurants in the Spokane area; but none of them had aired yet (and so they couldn’t advertise it). 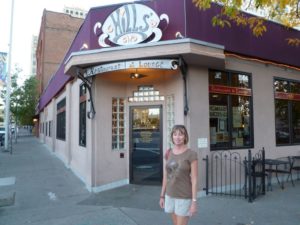 I would have preferred to order the Ribeye Steak, but I settled for a cheesesteak sandwich.  We didn’t have time to drink wine and savor a steak.  The sandwich was good.  The flavor and texture of the meat was as close to perfect as anyone can get, but the bread was just a touch on the dry side for my taste.  Unless you have oven-fresh bread, I guess a cheesesteak sandwich needs to be wrapped in paper before it is eaten (so the moisture and flavor of the meat infuses the bread).  Anna had an order of the chicken and smoked-Jack phyllo wraps, which were fabulous.  I would definitely look forward to dining at Hill’s again, and I’m sure I will the next time I get to Spokane.  I really enjoyed the atmosphere of the place—elegant but casual; and the menu is impeccable. Our server took good care of us.

Our next day began with lunch at Elk—a local eatery and taproom in an old residential neighborhood.  The bar was impressive, as was the food.  The place was very busy and our waitress was attentive and friendly.  Despite a big lunch rush, they seemed to have a hard time making change for a $100 bill (or making change at all for that matter).  We started with an appetizer of BBQ chicken quesadilla with a dipping sauce.  Cheesy goodness.  I ordered a beer-braised Reuben sandwich and Anna ordered a chicken Caesar wrap with a chipotle corn pasta (which tasted as odd as it sounds).  The wrap was good, and the Reuben was outstanding.  My only objection was I would have liked to see a little more meat on the sandwich—even if they needed to charge a little more.  I’d be happy to visit Elk again (especially at happy hour) but there are so many great places to eat in Spokane, I doubt I’ll ever get the chance. 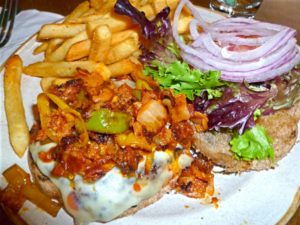 We drove down to South Hill for dinner at the Picabu Bistro.  The place was a bit snug, and they were packed (although DDD hadn’t aired yet).  The tables were turning fast and we didn’t have to wait too long.  Our server, Nicole, was great and I ordered the Cactus Burger which turned out to be crazy good.  They top it with a concoction of caramelized onions, peppers and spices all sauteed in bacon fat—with the bacon.  It was super rich, super tasty, with a peppery finish that bites you back.  It was a hamburger elevated to its highest form (and it was so good I had to go back later and get another one).  Anna ordered the chicken and corn Potstickers and they were fabulous.  Yes, she’s the sane one and I’m the hog.  Our Spokane host and good friend, David Morgan, ordered a dinner salad with steak and enjoyed it very much.

The Picabu Bistro rocks and everyone who lives in Spokane should go there at least five or six times.  Tell the owner, Jane, we said hello. 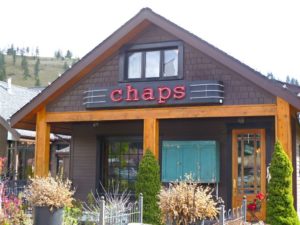 On our way out of town the next day, we made one last stop for breakfast at a place called Chaps.  We really weren’t expecting anything special, and boy were we shocked to see this place and meet the owner, Celeste Shaw.  The whole restaurant is decorated to look like a country farm house, and it is charming.  Celeste was very gracious even though they were super busy.  We sat out front on the patio and enjoyed the ambiance and the view of the old dodge truck (one of a matching pair). 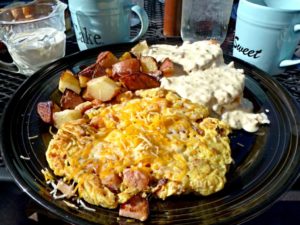 Anna ordered the Blueberry Muffin French Toast (which is what they made on the show) and I ordered the Meat Lovers Scramble which consisted of 3 eggs with bacon, sausage, ham and cheese, grilled potatoes and the kicker… a half order of biscuits and gravy.  This was a real Ken-size farmhouse breakfast. The bacon was so good I had to steal a piece of Anna’s.  She didn’t mind because she was too busy enjoying the blueberry cream cheese frosting.  We were happy campers indeed.  The patio was lovely, the sun was shining, the mood festive, the coffee was rich, and the service was great.  Everyone who has been to Chaps knows what a jewel it is.  The farmhouse food is made with love.  Chap’s has easily earned a permanent spot on Ken’s Top Tens for breakfast joints (and if I ranked the top tens, it would be in the number one spot). 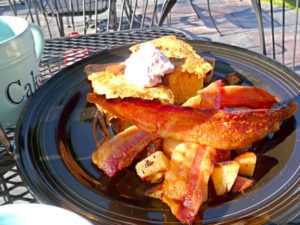 Celeste regaled us with a story about Guy.  Apparently, he was pulled over for something on the short drive over from the airport, and the officer who pulled him over didn’t know who he was—but he knew who Celeste was.  The officer called Celeste, who vouched for Guy, and the officer escorted Guy the rest of the way.  She said Guy wasn’t in the best of moods when he got there, but she soon took care of that.

It was obvious to both of us that Celeste is a lovely person who brightens the life of everyone she comes into contact with.  We rolled out of Spokane with full bellies and smiles on our faces (already looking forward to our next trip back). 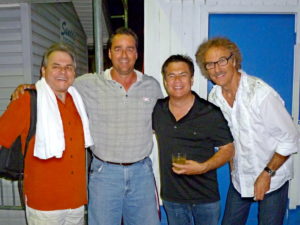 Photo Op with Pablo Cruise
Can I get talent by osmosis?

Bonus:  On our way to Seattle, we stopped for the night in Yakima to see Pablo Cruise—one of my favorite bands from back in the day.  We planned the trip around this concert.  We had front row seats and they rocked out all their biggest hits (and more).  They joked after the second song that they were going to take a 20-minute break… for a nap.  I’ve been to a lot of concerts but something happened at this concert that I thought I would never experience… I caught a drumstick.  I think the drummer, Stephen Price, could tell I’m a drummer too and threw it to me intentionally; but still, it’s not easy catching a drumstick at night in a crowd.  He autographed it for me after the show, and I got to have my picture taken with the band.  (I don’t like to look at pictures of myself, but I’m hoping some of their prodigious talent will rub off on me.)  If you like Pablo Cruise and missed their concert, you can see it on DVD.  It’s out with a new album release called it’s good to be live.