We pulled into Silver Spring, Maryland with The General Store in our sights.  The chef there beat Bobby Flay on the Fried Chicken Throwdown and the corn dog looked killer too.  I’ve had lots of good fried chicken, but I don’t know that I’ve ever had great fried chicken.  You can just imagine my disappointment to find out that the place was closed.  It appeared to be closed for remodeling, but I think it has closed permanently.  Not only did I not get the food I was looking for, but it also threw off our plans (more than we realized it turns out).

Our motel plans didn’t work out either and we ended up getting a room in Camp Springs, Maryland.  I unloaded the car and we decided to just chill out for the night and relax.  The girl at the front desk told me the closest food was a couple of fast food places, one chicken and the other burgers.  We’d never eaten at either place (and wish we hadn’t that night either).

We got up the next morning and Anna wasn’t feeling good.  She thought maybe she had food poisoning, but I pointed out that we had the same food and I wasn’t feeling bad.  Given that we were on such a tight schedule, we had to go into the district and stick to our plans.  Anna agreed, reluctantly.  Besides, we weren’t planning to keep the room a second night anyway.

We drove in and parked right on the mall, near the Smithsonian.  We set out on foot for the National Archives to see the Charters of Freedom.  On the way there, all the streets were closed off and there were cops swarming everywhere.  We looked off in the distance and it appeared to be a huge marathon getting ready to kick off.  It looked like thousands of runners.  It turned out to be a 5k, but it looked massive.

So, here’s the situation.  We arrived at 9:00 which is when I thought they opened.  They didn’t open until 9:30 and there were already two busloads of school children waiting to go in.  One of the chaperones told us to go to the front of the line, which we did.  Upon arriving at the front of the line, we read the sign that said no weapons allowed, including my pocket knife.  It was a full security check-point.  It was a brisk 10-minute walk each way back to the car, and Anna was feeling nauseous.  There were no bathrooms anywhere.  I left Anna at the door, walked all the way back to the car and hurried back as fast as I could.  The whole time I was gone, Anna was afraid she might throw up, or worse, right in front of these 100 or so teenagers.  Not good.  I made it back, hoping she was feeling better, and she took one look at me and made a dash for the nearest bush to hurl.  It was like right out of an Airplane movie.  Fortunately, one of the guards let Anna go in early, and then I met up with her shortly thereafter.  The display was quite impressive.  I got to go in and read about my freedom (as long as I was unarmed and screened by the police first).

As I suspected, the Constitution was there and it reads in a few different places that only gold and silver coin shall be money.  To my knowledge, we no longer have gold or silver coin in circulation as money.  I don’t know what to make of that, but it sure is curious.

Afterwards, Anna laid down in the car and I toured the National Air and Space Museum alone.  Of course they have a lot of great exhibits.  We had just been to the Museum of Flight at Boeing Field in Seattle (which is also very impressive).  I went back for Anna and we walked over to the Tune Inn Restaurant.  She still wasn’t feeling good and I hated to eat in front of her, but I ordered a cheesesteak sandwich.  Contrary to the menu description, there wasn’t much cheese on it and I was disappointed.  The place was dead (Sunday) and the bartender didn’t seem to be that pleased to have to wait tables.  It was a good sandwich, and I did eat it, but something happens when you order a cheesesteak sandwich.  You start thinking about how good it’s going to taste, and you can imagine all the melted cheese, maybe a little goopy, and the hot roll, and of course the steak itself and usually the grilled onions and peppers.  It’s easy to get disappointed if the sandwich doesn’t turn out to be the culinary masterpiece that you were expecting.  I rarely send food back.  If it’s not good, I just don’t go back anymore (which isn’t a problem for Washington DC).  I didn’t want to go to the District of Criminals this time either, but I wanted to see the Charters of Freedom and the Smithsonian. 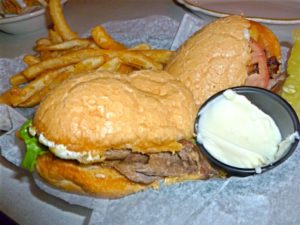 Anna and I had been to the district once before.  We saw the Jefferson Memorial, the Lincoln Memorial, Ford’s Theater and the house across the street, as well as the White House (from the outside).  We went up in the Washington Monument.  We also toured Monticello on that trip, which was a real treat.  But we missed the National Archives and the Smithsonian.  On this trip, I also wanted to go into the Capital Building, and the Library of Congress, but they were both closed.

We hiked over to the Tortilla Café and I ordered a papusa.  It was tasty and the owner, Catalina, was very pleasant and friendly.  They were very busy, but she chatted with me for a few minutes.  It’s too bad Anna couldn’t eat.

We drove over to the White House, nearing dusk.  We parked the car and walked over in front by the Ellipse.  We never would have dreamed what was going on inside the White House while we were standing outside.

We drove over to Dupont Circle, which is the location of a fictional spy agency called Axe, and agent Nick Carter, N3 (the American James Bond).  We walked around the fountain and took some pictures.  We also drove up to Oohhs & Aahhs, but unfortunately, we just weren’t in the mood for that kind of food.  I had thought to get a dessert or something to go, but we ended up not getting anything.  Turns out there was a good reason for not being in the mood which I was about to find out soon enough.

We next drove over to Comet Pizza and ordered (to go) the Stanley pizza, which is a crafted pizza with heirloom pork sausage, peppers and ricotta cheese.  It was about 14 bucks and I figured it would be big enough for both of us.  Wrong.  The hostess put in the order for us, and she warned us that it was personal size (since that’s all we ordered). She wasn’t kidding.  The pizza was very small indeed.  For the price, I was expecting something in the 10″ to 12″ range, and it seemed to me to be more like 7″ to 8″.  Despite its diminutive size, it was delicious.  I don’t want to knock Comet Pizza, I just don’t care for Washington DC.

We drove up to Baltimore and got a room for the next two nights.  We checked in, unloaded the car, and proceeded to relax.  That’s about the time I realized that I got the food poisoning too.  It was the food.  We don’t know if it was the chicken or the burgers, so we can’t say either way.  Odds are it was the chicken.  I don’t know why it took so much longer to affect me than it did Anna, but I definitely got whatever she had (and had the same unpleasant experiences that she had).

Thankfully, I managed to drift off to sleep but then woke up again for yet another trip to the bathroom.  As I stumbled half awake through the dark motel room, I thought I heard Anna say that she killed Osama Bin Laden.  I remember going back to bed wondering why would she say something as outlandish as that?  She may have been the other shooter on the grassy knoll, but she got away with that one.

Of course, all was made clear the next morning.  News of the SEAL Team mission was all over the TV.  In an unrelated story, silver sold off over four dollars in one day.  We were both feeling better, so thankfully whatever it was didn’t last long.