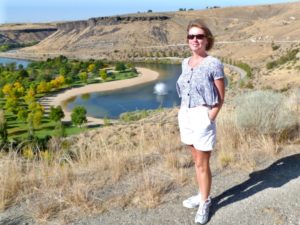 We started the day off with a guided tour of the Chris Reeve Knife factory, which was an unexpected treat.  The head machinist, Keith Wilson, gave us his undivided attention for over an hour while I asked question after question.  It was the most impressive array of machinery and group of people I had ever seen.  If you want a good knife and are willing to pay for the quality of something made in America with pride, I would highly recommend Chris Reeve Knives.  Personally, I carry a Kershaw/Ken Onion knife which was also made in the USA.  It’s a little pocket worn, but good as new and deadly sharp.  I never leave home without it, but you’d be amazed at how many places where honest Americans aren’t allowed to carry a simple pocketknife.  It’s a telling fact about what this country is turning into.  But I digress.  We left the knife factory and headed up for the Kodiak Grill, a few miles out of town.  On the way up, we drove past a park at the reservoir that was so beautiful we just had to stop and get a better look.  We took pictures and vowed that if we ever made it back to Boise, we would go to that park and enjoy some sun and fun. 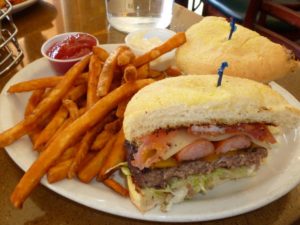 We opened the Kodiak Grill and what a gorgeous place it was.  I ordered the Kodiak Burger (which was made on the show) and Anna ordered the roast beef sandwich with sweet potato fries and maple pecan butter.  Anna and I toured the place and they had a photo collage of the DDD shoot (a fun treat).  Danarae Clor, the owner, was not there that day.  I was really hoping to meet her because she was so witty and entertaining on the show with Guy Fieri.  He has a lightning wit and she was able to keep up.  I hear Guy likes to be kept on his toes, and Danarae did that in spades.

The food arrived and boy was it good.  I think my French Fries were the best I’d ever had, and Anna’s were great too.  They had some other sandwiches that we wanted to try as well, but we would have to leave them for the next time.  After we got home, I sent copies of the pictures to Danarae, told her what a great time we had at her place, and asked her if she would share her recipe for the French Fries (and garlic aioli) with me.  She wrote me a nice letter back, but I am still waiting for that recipe.  The Kodiak Grill was very much like the kind of place I would like to have if I were going to open a restaurant.  It was mainly because of the Kodiak Grill and the fact that I didn’t get to meet Danarae that I had my heart set on returning to Boise someday soon.

Anna cooling off at the fountain
in BODO (Boise Downtown)

We drove back into town and headed for BODO which stands for Boise Downtown.  We walked around and had a great time checking out the shops.  We headed back out to Pizzal-Chick and got to meet the owner, Brad.  Turns out he is a musician and drummer and we had a chat about Neil Peart (of Rush) who is a living legend.  Brad whipped us up a pizza and it was worth the second drive.  The elk sausage was succulent and had a bite to it with a balanced heat and a nice finish.

We drove down State street to the Westside Drive-In but were too full to eat anything.  We ordered a chocolate malted shake and shared it.  The Westside Drive-In is a neat place with an open air patio flanked with dual drive-thrus.  We could tell it is immensely popular with the locals.

We headed back towards downtown in search of the infamous Donnie Mac’s Trailer Park Cuisine.  We arrived and checked out all the cool décor.  We asked if it would be okay to leave the car and go take a walk before dinner.  They recommended nearby Ann Morrison Park.

We walked over to Ann Morrison Park and it was gorgeous.  It was early evening, lots of people out, perfect weather, acres and acres of lush lawns, fountains, trees, flowers, shrubbery, bordered with a river.  It was like walking into Shangri-La.  Anna is a dog nut and we watched a woman giving a dog training class to a dozen people with their dogs.  One girl in particular was about 12 or 13 and her dog was just as big as she was.  We enjoyed the fountains and walked around till almost dark.  We crossed back over the bridge across the Boise River and started walking back up the greenbelt.  We stopped at a bench and decided to sit and rest and enjoy the beauty of the river and the trees.  The little girl and her dog were playing on the other side of the river.  She must not have noticed we were there watching her because all of a sudden she pulled her pants down to her ankles and squatted to pee .  Alrighty then. We turned our heads to give her some privacy, but it was a bit of a shock when something like that happens and you’re not expecting it. 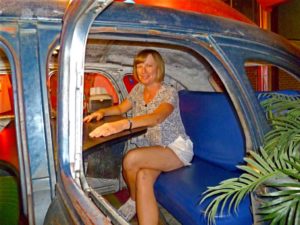 By the time we made it back to Donnie Mac’s, we were informed that they were going to close early; but they would make an order to go for us.  The cook and general manager from the show, Derek, was no longer there.  I imagine if he had been there we would have enjoyed the food better.  They have since closed their doors.  I got a picture of Anna in the car, and she just happened to sit in the same spot that the very attractive brunette from the show did.  If this was one of those old private eye movies, I’d call her a doll face (and wonder if she had the gams to match those big eyes).

I just watched the segment and in addition to the Mac and Cheese Gone Wild, that chicken sandwich looked tasty.  It reminded me that I used to love the Chicken Supreme sandwich from Jack in the Box.  Now that they’ve taken it off the menu, I hardly ever eat there anymore; maybe once or twice a year if I get a craving for those ridiculously cheap tacos.  Everyone I know seems to love those tacos as much as I do.  Maybe if I were actually a chef, I could figure out the flavor profile.  If anyone has a good recipe for those tacos, and I can make them at home, I will definitely publish it here and give you all the credit (you‘ll be a hero and loved by millions).  The meat has a nice heat on it, but I suspect the real secret to those tacos is some kind of a chile flavor worked into the masa to make the tortillas.  Maybe it’s just voodoo, but they are quite tasty (if not satisfyingly greasy).

Funny thing, I never would have ordered a chicken sandwich (when I can have a burger), but my roommate way back when arrived home with an extra one that he couldn’t eat.  I offered to eat it because I can’t stand to see food go to waste.  Well, I fell in love with that sandwich and ordered it every single time I went to Jack in the Box (till they took it off the menu).  I had a very similar event happen again, which I’m looking forward to sharing with you.

We had such a nice time in Boise, we were sorry that our stay had to be so short.  We vowed to stay longer next time.  We got up and hit the road early the next morning to drive up to Spokane.  (DDD count: five)