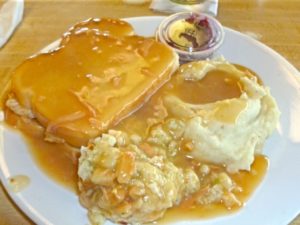 We arrived in Buffalo after a leisurely morning and having found a room for the night in a little town called Waterloo.  Before driving into Buffalo proper, we cut south for lunch at Earl’s Drive-In in Chaffee.  Earl’s is a bit old-school, but it is big and roomy.  We settled into a table without a wait and considered the lunch selection.  We went with our faithful standby, the BLT, and I ordered an open-face turkey sandwich which is one of my diner favorites. 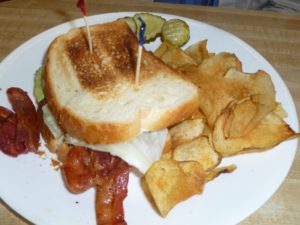 I’d say the BLT was the best part of the meal.  The turkey sandwich tasted about how it looks in the picture… fair (which also describes the service).  It was another of those situations where our server could care less that we drove all the way across the country because we saw them on DDD.

It appears that Earl’s Drive-In has since closed its doors for good, and that the owner, Earl Northrup, passed away earlier this year.  I’m sure Earl’s Drive-In will be missed by all their regulars. We didn’t get to meet Earl, but he loved music, and serving good food in his own restaurant, so that’s good enough for me.

We drove into Buffalo, got a room for two nights, and unloaded the car.  The turkey must have done its thing because we decided to take a little nap, but ended up sleeping the whole rest of the afternoon.  It had been a whirlwind of a few weeks and I guess we were due for a little extra rest.  It was dark and raining when we woke up and I set out alone for Grover’s Bar and Grill (and a big bowl of that cheeseburger soup).  Since it’s a sports bar, I naturally assumed they would be open on Sundays.  Nope.  I actually did phone from the motel first, but they didn’t answer.  I figured it was because they were too busy (wishful thinking).

By the time I made it back to the motel, alone and shattered, I didn’t have the heart for anything other than fast food.  I went to a place that rhymes with Taco Smell and grabbed a bag full of grub to take back to the room. 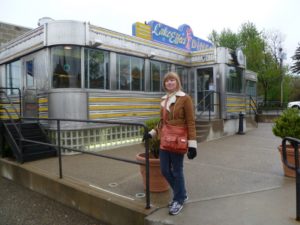 Anna in front of the Lake Effect Diner

We were bright-eyed and bubbly the next morning looking forward to breakfast and the world famous Niagara Falls.  Anna had been there once before, but it was my first time.  We trekked over to the Lake Effect Diner and were rewarded with a quick table.  The service was great, and I loved the décor: bright, clean and inviting.  The breakfast itself was a bit of a miss.  Mine was perfect (see picture) except for a small detail.  They serve a house made breakfast sausage (which I totally dig) but they didn’t mention that it was a maple sausage (which I don’t dig).  I ate it anyway.  I’m not into mixing sweet and savory.  I’ve always been bewildered how people could pour maple syrup on their sausage or bacon.  It’s not my bag baby.  On a related note, I haven’t as yet tried fried chicken on waffles with maple syrup, but I’m planning to try it one of these days.  I plan to have it at The Early Bird Diner in Charleston, South Carolina, unless I come across it somewhere else first. 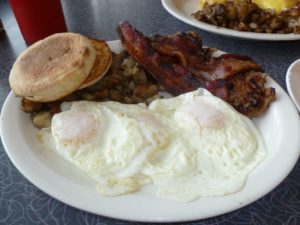 Anna ordered Eggs Benedict which are made with a house cured pork instead of Canadian Bacon.  The meat was a bit tough, and they adjusted the bill.  We also shared a pancake with maple butter and whipped cream.  Heavenly.  We wanted a big breakfast for our long awaited adventure at Niagara Falls.

In spite of the few minor glitches, the Lake Effect Diner was a hit for me, and I’d be happy to eat there again.  The people in Buffalo are lucky to have such a great place. 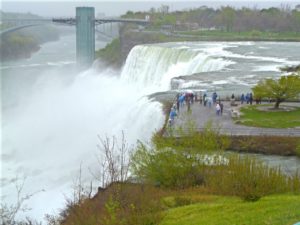 Although the weather was cold, windy, overcast, and alternating between drizzle and light rain, we had a blast at the falls.  It really is breathtaking, and to stand so close to that much water rushing by is awesome to say the least.  It’s so powerful, it just makes you stop and try to get a sense of perspective.  We hiked everywhere that was open and went out on the boat ride. 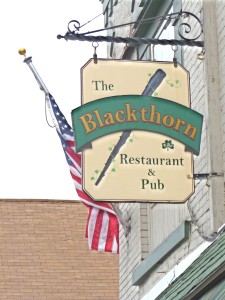 Afternoon found us pulling into the Blackthorn Restaurant & Pub.  It was too early for dinner so we had the place practically to ourselves.  Our waitress took excellent care of us.  We ordered a bowl of the beer and cheddar soup, and an order of the stuffed peppers (when in Rome).  The food was even better than it looked in the pictures and we were quite happy with our selection.  They were served atop slices of fresh bread grilled with butter and garlic, so Anna had to dance on the table.  It’s definitely the kind of food that you’d want a pint of beer to cut the richness of the cheese and butter.  Good stuff.  We asked about the name of the place and she told us that it refers to a walking stick (which is like a cane).  Every blackthorn is a custom made one-off.  I assumed the stick on their sign was a pool cue.  Turns out that they host a Blackthorn club and she took us upstairs to show us their club room as well as an impressive array of blackthorn sticks.  We left happy, and took a long leisurely stroll around nearby Cazenovia Park. 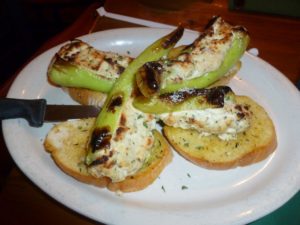 In our typical fashion, we decided to pick up a pizza to go at Pizza Junction, and take it back to our room.  We arrived to find that the place is divided into two sides, a take-out side and a dining room side.  Here’s the funny part.  The take-out side doesn’t have any menus, or a menu board.  The people at the window said that if we wanted to look at a menu that we needed to go into the dining room.  Odd.  We went into the dining room just to get a menu.  The waitress there would have given us great service, but we weren’t looking for dining room service.  We went back to the take-out side, and they managed to upset us over the lack of a menu issue (which they seemed to find amusing)—so we decided to cut our losses and walk away.  If they have good pizza, I guess we’ll never know.

I dropped Anna at the motel and headed back to Grover’s.  They were open this time and royally packed.  I managed to get a stool at the bar and put in our order.  The bartender was friendly enough, but super busy.  I asked her why they were closed on Sunday and she said that if they didn’t get at least one day a week off they would go crazy.  I believe it.  The place was loud and boisterous.  It’s just as well that we didn’t intend to eat there.  I ordered a sandwich for Anna, a cheeseburger for myself and a bowl of the cheeseburger soup (which was excellent).  The food came out in good time (which was nice for me as I’m not into loud bars).  I paid the check, but noticed that it was a little higher than what I was expecting.  It turns out that they charge .75 each for the little white to-go containers (which cost about .07 cents each).  That was a first (first and only actually).  No big deal, it’s just unusual.  The food was good, and I’m sure it would have been even better hot and fresh.  If I ever make it back to Buffalo, I will definitely go back for more of that killer cheeseburger soup.  I may have to try that one at home. 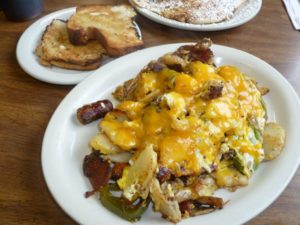 The weather was a bit nicer the next morning as we headed over to Sophia’s Restaurant for breakfast.  It’s located in an unassuming building and for whatever reasons (that they preferred to keep to themselves) there wasn’t any signage.  Our waiter was quick and busy, if not a bit short.  Nothing curt or anything, just not warm in the least (which put us off a little).  We weren’t feeling the love that they talked about on the show.

We ordered a hearty breakfast and the food was outstanding (cooked with love by Sam, Sophia‘s son, just like he said it was on the show).  Anna had cinnamon/apple/walnut pancakes and I ordered the breakfast scramble with the house made toast.  I still remember how much I enjoyed that toast.  It really hit the spot too.  It’s a guilty “on the road” pleasure.   The impression I am left with is that they prefer to cater to their local patrons (regulars) and don’t care for tourists.  Of course, I could be wrong.  I tried to talk to Sam, but he was too busy to talk to us (as was Sophia apparently).  So, if you’re looking for a great breakfast, go to Sophia’s.  If you’re looking for warm friendly service, maybe you need to be in the family or something. 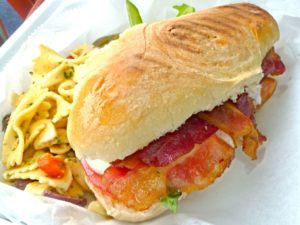 We were on a timetable to arrive in Cleveland in time for Taco Tuesday at the Parkview Nite Club, so we didn’t have time or the stomach to eat a full lunch.  We drove over to the Mulberry Italian Ristorante and ordered an Italian sandwich to go.  It was an Italian version of a BLT, except spun up by a real chef with pancetta and served on an Italian roll.  We got to meet the chef and owner, Joe, and let him know how much we enjoyed watching him on the show.  It really was a shame that we couldn’t stay and have a full lunch.

Okay, I just finished watching that segment, and for those of you who missed it, Joe makes the most incredible meatballs and lasagna that you ever wanted to see or eat.  OMG  It’s a sin that I was that close to such a masterpiece of lasagna and didn’t order it.  I should be spanked.  There was so much planning, it just slipped through the cracks.  Except for pizza, lasagna is my favorite Italian dish and I would never knowingly miss an opportunity to try a lasagna made entirely from scratch by a real pro.  I aspire to do it myself at home, and my meatballs are really coming along well.  I haven’t started on the pasta yet (but hope to soon).  The next lasagna I have on my radar is up in the wine country, either at Café Citti or Catelli’s Restaurant (and hopefully back to the Schellville Grill).