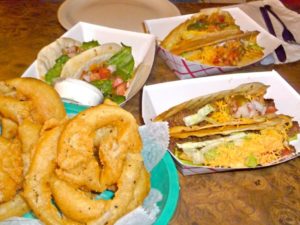 We rolled into Cleveland, no trouble, and headed straight for the Parkview Nite Club.  The place was super packed, but we got a table quickly.  I ordered a beer and a full complement of tacos.  It was a long wait for the food, and the tacos disappointed.  I suppose they could have been good, but they were prepared on deep fried flour tortillas, which ended up being dry and lacked flavor.  Out here in California, we only use corn tortillas for fried tacos, and it just doesn’t occur to me to ask when we’re away from home.  Flour tortillas can be just fine for tacos, but not deep-fried.  We were so hungry we just ate them anyway.  The rest of their food might be great, but we didn’t sample anything else.  The place is super popular with the locals. 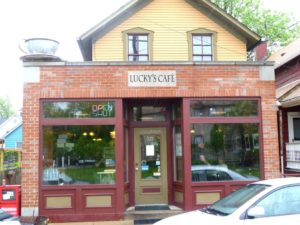 It was our first time to Cleveland and I knew we were going to get some killer food.  On our first morning we went to Lucky’s Café.  The place is charming, inside and out.  We were hoping to meet the owner and chef, Heather Haviland, but she was out sick.  Our server took excellent care of us, and we treated ourselves to some fresh coffee.  We ordered both items from the show, biscuits and gravy and a Reuben sandwich.  If you haven’t seen this segment, Heather makes everything from scratch, and I do mean everything.  She even corns her own beef. 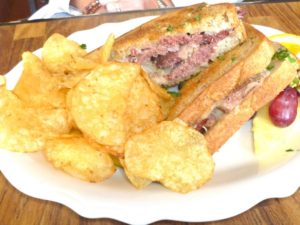 She has her own garden too, right next door.  The food tasted even better than it looks in the pictures.  I was sure it was the best Reuben I’ve ever had.  The biscuits and gravy were hearty and scrumptious.  None finer.  I was super disappointed that we didn’t get to meet Heather, but Lucky’s Café handily makes Ken’s Top Tens for breakfast.  I will not visit Cleveland without another trip to Lucky’s. 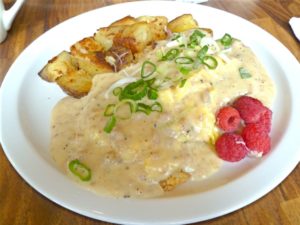 We rolled out of there happy campers and spent the rest of the day at the Rock and Roll Museum and Hall of Fame.  We were there about eight hours, and had a blast. I could have easily stayed another eight hours.  Fair warning, they have a very large and very alluring gift shop, so plan on spending some bucks there.  We were on a tight cash budget, but I could have easily bought four or five hundred dollars worth of DVDs, CDs, clothes, gear, art and posters. 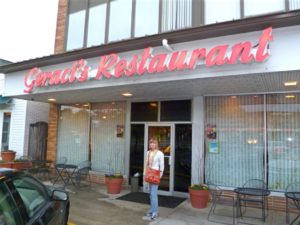 Anna in front of Geraci’s Restaurant

We next headed over to Geraci’s for a pizza to take back to our room.  The service was great and so was the pizza.  Sadly, we didn’t get to meet Fran Geraci, but I scribbled out a note for her letting her know how much we enjoyed watching her on DDD.  The pizza was better than it looks in the photo.  If I ever get a chance to go back for more, I will be a happy, happy guy. 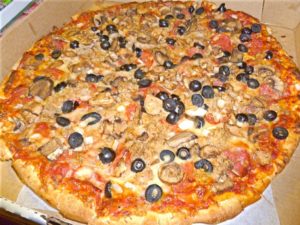 For anyone who lives in Cleveland, or visiting there, that’s your perfect day.  Breakfast at Lucky’s, Rock and Roll Hall of Fame, and dinner at Geraci’s.  There, I said it.  I guess if I’m describing the perfect day, I should throw in some drinks and other activities, and maybe a little gooey dessert somewhere.

A funny thing happened on the way back to the motel from Geraci’s.  I zigged when I should have zagged on the GPS, and instead of ending up at the motel, we ended up at Melt (the grilled cheese sandwich place).  I suggested to Anna that since we were there anyway, let’s get a grilled cheese sandwich to go, and have it with the pizza.  Great idea.  There was just one little problem… the place was so busy, it took over 45 minutes for our sandwich to come out. 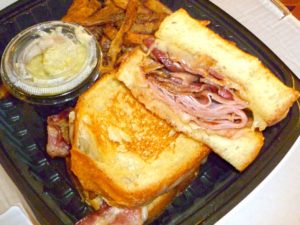 We had a nice stroll up and down the boulevard.  The sandwich was good, but we learned that grilled cheese sandwiches need to be eaten piping hot off the griddle.  If you box them up, they got soggy and cold.  They lose their GBD-ness (Golden, Brown and Delicious).  Anna still maintains that nobody makes a better grilled cheese sandwich than me.  It’s one of her favorite foods, so I’m not going to argue with her.  Other than making them with love, I don’t do anything special, except serve them GBD and piping hot.  We did finally make it back to the motel, and savored every bite of that Geraci’s pizza pie (as much as we could eat that is).  We drifted off into a blissful slumber. 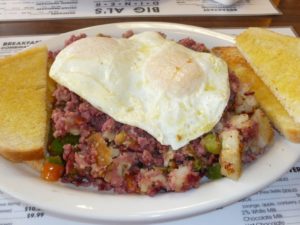 If you’re in Cleveland, and thinking Food Network, you come up with Iron Chef Michael Symon.  He is my favorite Iron Chef, and he recommended the corned beef hash at Big Al’s.  We went there and that’s what I had.  I’m happy to report that Michael Symon is right, it is the best corned beef hash I’ve ever had.  It’s not a DDD spot, but it was on The Best Thing I Ever Ate (which doesn’t surprise me).

In keeping with our Michael Symon theme, we went to Lola for lunch to split the Lola Burger (which Michael Symon lovingly made with Paula Deen on her show).  It’s a cheeseburger on an English Muffin.  How can you miss?  Lola was very impressive indeed with white linens, a long bar with great art work and a wine selection, as well as an open kitchen.  Sadly, Michael Symon himself was not there.  I had written a letter in advance, but never got a reply.  The service was impeccable and our waitress told us that Michael Symon is there a lot of the time, unless he is out of town.

Our great plan for the afternoon was to explore the Farmer’s Market.  We were surprised to get such a good parking spot.  It didn’t take us long to figure out that the reason why we got such a good spot is because the market is closed on Thursdays!  That was a major bummer for us, because we already knew that we were leaving the next morning and were going to miss the whole thing.

We drove over to Sterle’s Country House and sampled the famous cheese blintzes with whipped cream and strawberry filling.  They were tasty, and I let Anna enjoy most of them.  The place is gigantic.  It was the end of the lunch service, and I guess all the staff were spent.  The lady from the show was at the cash register, and I gushed a little about how we enjoyed seeing their place on DDD.  She smiled and said that Guy was a lot of fun, but it seemed she wasn’t in the mood to chat.  Oh well.

We spent a few hours walking around a new outdoor shopping mall west of town.  It was really upscale and nice, which I should add was a nice departure from most of the surface streets in Cleveland (which were rough and potholed).  We chatted up a beautiful young woman (Morgan) who was working at a cupcake stand.  She was getting ready to leave for college in California.  She and Anna had a nice chat about Lolita, and it seems the young woman is destined for a bright future. 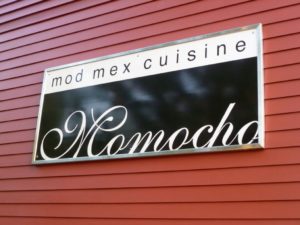 We drove back into the middle of town and arrived for dinner at Momocho, for some Mod-Mex cuisine.  The place was packed, both floors.  After a short wait, we got a table upstairs and split an order of Machaca.  Man was that food good.  I cook Mexican at home a lot, and we were both blown away at the richness of the flavor, as well as the balance of heat.  The beef brisket is braised in a combination of coffee and ancho chiles and served with guacamole, salsa verde and tortillas.  I wish we could have tried everything on the menu.  If you like Mexican and you’re anywhere in the vicinity of Cleveland, you’ve got to go to Momocho.  We didn’t get to meet the owner. 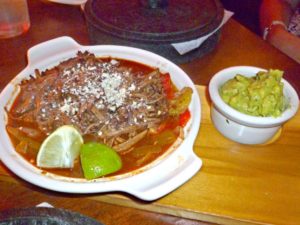 Needless to say, we finished our Cleveland tour on a high note.  I still have very happy thoughts of the food we ate there.  I will be very happy indeed if I can ever come up with a good reason to make it back to Cleveland.  The food is reason enough, but no one is paying me to go on the road to eat.  Although, I’d be open to that if anyone wants to sponsor me and subsidize my luxurious lifestyle.  If I can’t get paid for eating, I’d like to get paid just for being smart, or good looking.  No one has ever paid me for those things yet, but it doesn’t hurt to throw out some feelers.