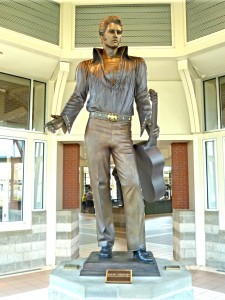 We rolled into Memphis just in time for lunch and headed straight for Uncle Lou‘s Southern Kitchen.  To refresh your memory, this is the place that has the famous fried and honey dipped chicken.  BBQ chicken is one of Anna’s favorite foods and we ordered a three piece dinner to share with coleslaw and a biscuit.  They served us fried okra by mistake, but said to enjoy it anyway—and we did.  Uncle Lou was there working and the place was packed.  The honey sauce is spicy, with the spice blend called “Corruption” because once you’ve had it, you’ve been corrupted.  Guy called the honey dipping sauce “Sweet, Spicy, Love” and it appears that Uncle Lou changed the name (following Guy’s keen restaurant acumen).  It was messy but it sure was good.  It’s probably the best chicken we’ve had anywhere so far.  We took it to go and ate it at a local park, which we like to do when we can.  I forgot to take pictures, but they wouldn’t have done the chicken justice anyway. 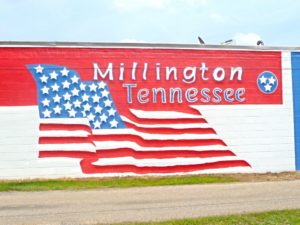 We ended up having to drive back and forth across Memphis to accommodate our destinations with our appetite.  First we drove up to Millington, which is where I was born.  My dad was in the Navy, and they had a medical facility there at the time.  I can’t say that I remember being born, but it was touch and go during those first few weeks while I was learning how to walk and feed myself.  It was another month or so before I developed my life-long infatuation with girls and learned how to flirt. Of course, it’s not easy trying to look cool and pick up chicks on a tricycle, but the Big Wheel hadn’t been invented yet; and by the time it came out I was too big for it.  Things didn’t really heat up until preschool, and by Kindergarten there were so many girls around its a wonder I ever learned anything.  Having been born in the South, I am a proud Southern Boy and expect I always will be (although I was raised in California). 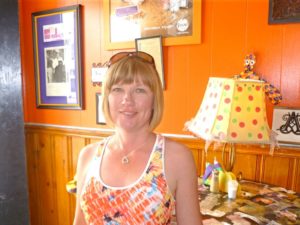 Anna enjoying the festive decor
at Alcenia’s in Memphis

When we got back into town, we headed for Alcenia’s and a slice of her famous Sweet Potato Pie.  The place was decorated to the max with beautiful colors from Africa.  Alcenia came out to meet us.  She is a very pleasant and gracious woman, and we enjoyed chatting with her.  We really had the feeling of being in someone’s home.  The pie was excellent, and we will shoot for a full meal next time.

We went downtown and parked to walk out to Mud Island.  It was a nice walk and a lot of fun.  (It was nearly flooded a few weeks later.)  It was a fun destination, and I highly recommend it.  They have a scale model of the entire Mississippi River that’s hundreds of feet long.  It’s free.  It was fun to walk the sky bridge (which is where Tom Cruise did some of his sprinting in The Firm).

Next we headed over to Leonard’s BBQ.  We weren’t really hungry, and probably wouldn’t have made the drive, except that we also wanted to see the Neely’s BBQ place which is in the same area.  Neely’s was fun to see, but we didn’t stay to eat.  Leonard’s was a cool place, with an old restored truck right in the middle of the dining room.  We ordered a slice of the Lemon Ice Box Pie to go.  I don’t remember having the pie myself, but Anna gave it three stars which means it put a big smile on her face.  I took some pictures, but they didn’t turn out.  As anyone with eyes can see, I’m not a professional photographer. 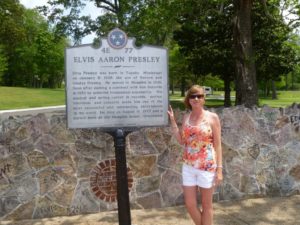 Anna in front of Graceland

We drove back over towards Graceland, and Anna jumped out of the car to snap a few pictures.  Okay, I kicked her out, but she had a good time seeing as much as she could see from out front.  Unfortunately, we just didn’t have enough time to take the tour.

We filled the car up with gas, and followed one of the light pink limos down the street to Marlowe’s BBQ.  The place is decorated with tons of Elvis memorabilia, and has at least two or three dining rooms.  We sat in a booth off the bar.  We ordered a full rack of baby back ribs (just like the rack on the show where the owner said they are, “Tender as a woman’s heart.”  They were tender by the way, and had a great smoky sweet flavor.  They weren’t hot, which was a bit disappointing; but they sure did taste good.  The platter also came with baked beans, cole slaw, bread and great BBQ sauce.  Sorry, I forgot to take pictures.

We enjoyed our day in Memphis, but of course we left a lot undiscovered.  I had hoped to walk downtown and check out the clubs and music on Beale Street, but we ran out of time.  We left town and headed for Northwest Mississippi to visit with family for a few days.