Monday, April 25th   We headed north out of Mississippi on the Natchez Trace Parkway which is a bucolic two lane affair with virtually no traffic.  We pulled off at one point to visit a man who I know through his writing, Franklin Sanders.  We had a great visit, and I hope our paths cross again someday.  You can find out more about him on my links.  In an amazing coincidence, that also happens to be the very day that silver peaked about $49.75 per ounce.  I say amazing because Mr. Sanders literally wrote the book on the investment opportunity in silver, and is a leading precious metals dealer as well as a market analyst and commentator. 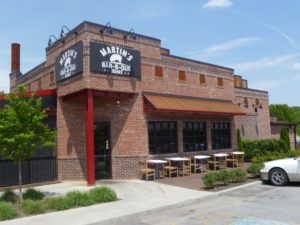 We pulled into Nolansville and drove straight to Martin’s Bar-B-Que Joint.  As you can see from the pictures, Martin’s is great looking place with lots of picnic tables and signs on the walls.  You order at the register and they bring your food out to you.  I went exploring and found the whole hog smoker towards the back (which was dormant at the time).  I didn’t have any trouble keeping myself amused while we waited for our food. 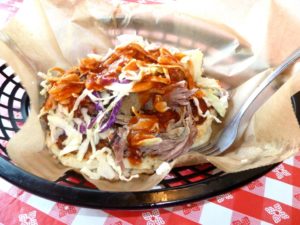 We ordered the famous Red Neck Taco, which was excellent (BBQ pulled pork on tortillas with coleslaw and sauce).  We also had a half rack of ribs and baked beans, cole slaw, extra BBQ sauce and Texas Toast. The prices were modest.  Everything was excellent and we left happy except for one minor detail… Martin’s is the only place in the country that charged us for glasses of water.  I wouldn’t have mentioned it except when the guy at the register handed me the two 20 ounce plastic glasses for the water fountain, I told him one glass would be enough and that we would share.  He kept the second glass.  What I didn’t know at the time was that he had already charged us for two glasses of water, and didn’t say anything about it.  So, that was his tip. 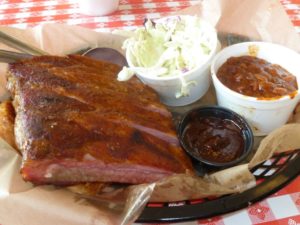 I want to reiterate that the Q at Martin’s is some of the best we’ve had anywhere.  All the food was finger-licking good and we barely made a dent in the menu.  The meat was smokey and moist and the sauces were sweet and sticky, which is just how I like it.  By the way, the ribs didn’t need any sauce, but I can’t pass up an opportunity to try an original pitmaster’s sauce. Martin’s easily makes Ken’s Top Tens, and if he ever gets knocked out, that means I’ll be spending time in barbecue heaven.

We headed north into Nashville proper, and headed over to Arnold’s Country Kitchen.  We got a slice of the Chess Pie and sat down to enjoy it.  The owner came out to greet us and insisted that we have a slice of their award winning Cocoa Pie on the house.  It was a little too sweet for my taste, but Anna liked it.  It was great to meet the owner and it was obvious that he loved his work.  The place was full of locals and I’m sure they are very busy with their “Meat plus three” cafeteria specials (and James Beard Award winner).

The highlight of the day for us was Savarino’s Cucina.  We ordered three hand-crafted sandwiches to take with us to my aunt’s place in Kentucky.  We ordered the Al Bunetta, which is a breaded chicken sandwich with roasted peppers and balsamic vinegar.  We got the Mike Figlio, which is a grilled sausage sandwich.  And last we ordered the Ed Pontieri, an Italian cold cut sandwich with mortadella, soprassata, coppicolla, provolone, lettuce, tomatoes, oil, vinegar and seasoning with the kicker of the bomba calabresse (which is a cross between a hot sauce and a Giardiniera).  That sandwich was made on the show, and it tasted just like the work of art that it is.  All the sandwiches are made on house baked fresh bread, and the people in Nashville can consider themselves lucky to have such high quality Sicilian food right there near the middle of town.

The owners weren’t in, but we did get to meet their daughter (heir apparent) who was very friendly (as well as her son).  I will definitely be rushing back to Savarino’s the next time I make it to Nashville.  My aunt was happy that we showed up with dinner (after narrowly dodging some tornadoes). 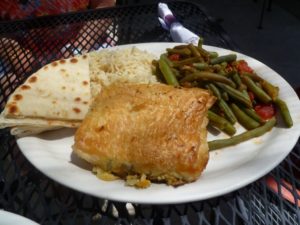 After a nice visit with the family, we doubled back through Nashville and stopped for lunch at Athens Family Restaurant.  The dining room was charming and inviting, but it was a beautiful day and we picked an outdoor table.  Our server was from Seattle and he took excellent care of us.  Anna ordered a dish of a Greek chicken filling wrapped in phyllo dough, which was made on the show.  It’s called Kotopita, and it’s like a Greek version of a chicken pot pie.  It had a great flavor and was piping hot.  It was so hot, we had to let it cool off a little before we could eat it.  I ordered the Greek style meatballs with sauce which they also made on the show (Suzukakia). 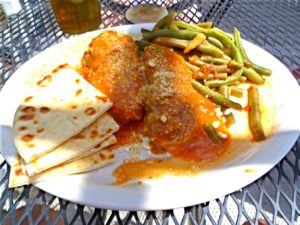 If you’ve never thought about it before, it must be hard to hold meatballs/meatloaf for service, because you can’t make them to order, and you can’t let them keep baking after they have finished cooking.  They’re no good microwaved either.  As it turns out, the Suzukakia weren’t hot enough for my taste, but maybe it’s just me.  Being a Southerner, I like my food piping hot. I did enjoy trying the authentic Greek flavors, prepared by an authentic Greek chef, but my palate is more used to Italian meatballs.  I liked Anna’s dish better.  Oh well, that’s what happens when you take a risk and try new things.  Sometimes it thrills and delights, and other times it disappoints.  No big deal. 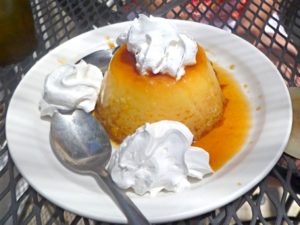 Our server wanted to know how we liked the food.  I was honest with him.  I didn’t mean to make it sound like I was complaining.  I did finish the dish.  I was giving feedback and constructive criticism.   He told me that if I wasn’t delighted with the dish that the owner would insist we didn’t pay.  Well, I insisted on paying anyway and so our server brought us a free dessert which was their famous cream caramel; and it was delightful.  We got to meet the chef (Adel) and I told him that I really enjoyed watching him on the show.  He is a talented and passionate chef who is rockin’ it out in the kitchen.  I would be happy to go back, and give them my highest recommendation.

I had been hoping, since we were in Nashville, that if we stopped long enough to enjoy a nice lunch at a nice place, there was a good chance that I would run into Shania Twain.  I kept my eyes peeled, but she never made it.  Probably just missed her.  I think Anna was hoping to run into Billy Currington.  Maybe we’ll have better luck next time.

I’ll take this time to mention that we rarely complain or send food back.  We both hate to see food go to waste under any circumstances.  On rare occasions, I may send a dish back to be switched out or fixed, but the expectation is always that we are going to pay for our meals.  We don’t angle for free food or free desserts, and we would never eat food and then not pay for it.  We are often treated to desserts, or samples of things, but that is more a matter of spreading the love.  I can appreciate a chef/owner who has a flat money back guarantee policy, but there’s a difference between when a dish is substandard/flawed and when the diner just doesn’t care for it personally.  We will send a dish back if there is something seriously wrong with it, but that is thankfully rare (especially at DDD joints). 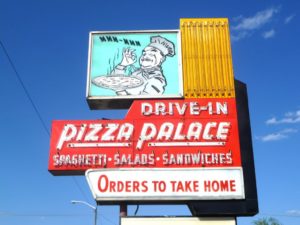 We hit the road for Knoxville, and stopped for a pizza (to go) at the Pizza Palace.  I loved the segment on DDD, and the pizza looked great.  A first season standout.  The Pizza Palace was the first place on the second episode; so it was the fourth place we ever saw, and the first one that we ever got excited about watching and visiting.  When we arrived, the place was packed, mostly with people waiting for orders to go. There must have been about eight or ten guys working that very busy (and very open) kitchen, and one of them was the owner from the show (Charlie Peroulas) who was working just as hard as everyone else.  I wanted to chat with him, but he was just too busy.  For a place that makes their own dough from scratch, their own sauce from scratch, and grates their own cheese fresh, the pizza was very tasty.  Unfortunately, I had the image of the combo pizzas from the show emblazoned into my brain, and their pizza was only about half way there in terms of toppings.  I wouldn’t dare challenge them on their quality control, but maybe it had something to do with the cameras.  I mentioned how long I had been looking forward to that pizza and that I hated to leave disappointed.  They politely offered to make us another pizza and we accepted.  The second pizza was fully topped and very satisfying indeed.  The place was packed and slammed the whole time we were there.  People waiting inside and outside for pizzas and other goodies just as fast as they can make them.  It’s immensely popular with the locals.

Speaking of cameras, Guy is sharp as a tack when it comes to food costs and portions. When the cameras are rolling, he’s often surprised or shocked and says something along the lines of, “You’re using that much?”  (Meat, cheese, sauce, whatever).  Well, being a food nut, I happen to be one of those people who remembers what the food looked like on the show, and I think it’s fair to have it served the same way.  I’m happy to report that most of the time, the food is exactly the way I remembered seeing it on the show.  Their recipes and menus are scrutinized long before Guy Fieri shows up, and I think the expectation is that they won’t change the recipes/portion sizes after the show airs.  They might have to raise their prices, but with inflation and gas prices like they are who can blame them?  If anything, most of the prices at the DDD places are lower than they should be, not higher.

We headed up the road and stopped for the night in Wytheville, Virginia.  We drove through an area near Marion, Virginia which had just been hit by a tornado.  We had never seen so much destruction.  It was a chilling sight to see roofs ripped off the tops of houses, trees twisted like twigs and power poles laying every which way.  It was a disaster, and it looked to us like it had just happened.  2011 was a very bad year for tornadoes (and floods) and it seems we narrowly missed a few.  I don’t think anyone was killed there, but the damage looked absolutely devastating.  We were thankful to be safe.