Sacramento California may not be at the top of your list when you think Foodie Town, but to the one and a half million people who call it home they can be proud of the foodie destination at Jamie’s Broadway Grill.  It’s a local treasure with a very loyal crowd of regulars who flock in for the cold drinks, hot food and good times. 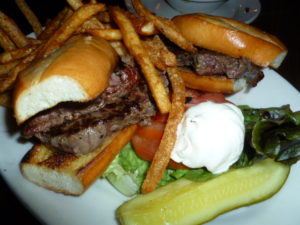 The food is so good at Jamie’s that it caught the attention of the producers at Diners, Drive-Ins & Dives on the Food Network.  They sent Guy Fieri out to investigate and he was so blown away with the food that he didn’t know what to say (which is quite rare).  We made our first trip to Jamie’s to see what all the fuss was about and I couldn’t have been more blown away with the food.  I knew I would have to go back (and keep going back).

Currently owned by career chef Jamie Bunnell and his lovely wife Vickie, Jamie’s was opened in 1986.  It started as a dive bar with a modest kitchen off the back for pub grub. Jamie went in on the place with his dad who ran the bar while Jamie turned his attention to elevating the menu.  Jamie’s dad passed, but Vickie has joined in on the front of the house revelry (which happens under her watchful eye).

Jamie’s Broadway Grill is the reason why people say, “Sometimes those little hole in the wall places have the best food.”   Besides the great service we received from Vickie and our veteran server Mallory, the great food at Jamie’s has to be experienced to be believed. As dive bars go, most places would be well ahead of the game if they had three or four good items on the menu.  Jamie’s features a wide array of mouth-watering choices from good old American classics like Roast Turkey, Meatloaf and Fried Chicken, to crazy good sandwiches and burgers, gourmet salads, succulent braised meats, super fresh seafood, award-winning soups, and even smoked meats like Beef Brisket and Prime Rib. 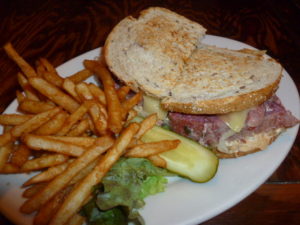 Jamie makes everything from scratch, so you’re going to sample food here that you can’t get anywhere else.  On our last trip through town we stopped and had the Reuben and the Garlic Steak Sandwich.  I knew I had to have the Reuben again, but then I started to wonder, “What if it’s not as good as I remembered it?  Wouldn’t that be terrible?”  I’m happy to report that I had nothing to worry about.  Not only was the corned beef perfectly seasoned and super moist, and the whole sandwich expertly crafted, but it was even better than I remembered it (life is good). Be sure to bring your appetite because the portions are generous.

Following a great dinner on our arrival Thursday night, we made plans to return Friday night for the smoked BBQ Beef Brisket sandwich and other goodies.  I had hoped to meet the man himself, but I was told that Jamie usually comes in the wee hours of the morning and leaves after the lunch service.  I didn’t know if that would be convenient or conducive to interviewing him while he’s trying to work, but if I had any doubt about driving back down there at 4:30 in the morning, that doubt was settled when we got served the brisket sandwich. 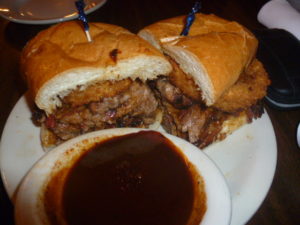 Holy smokes, the sandwich was piled high with lip-smacking beef goodness on pillow soft bread and served with a side of the best barbecue sauce I can ever remember having.  As Guy would say, that brisket was Prime Time. The meat was so tender and moist it didn’t need any sauce, but the sauce was simply irresistible.  I knew I was in the presence of greatness.  My interview with Jamie would confirm my suspicion that the sauce had some of the meat juices/drippings in it along with molasses and other spices. The sauce was rich, luxurious and wonderfully balanced between spicy, tangy, heat and sweet.  Finger lickin’ good. 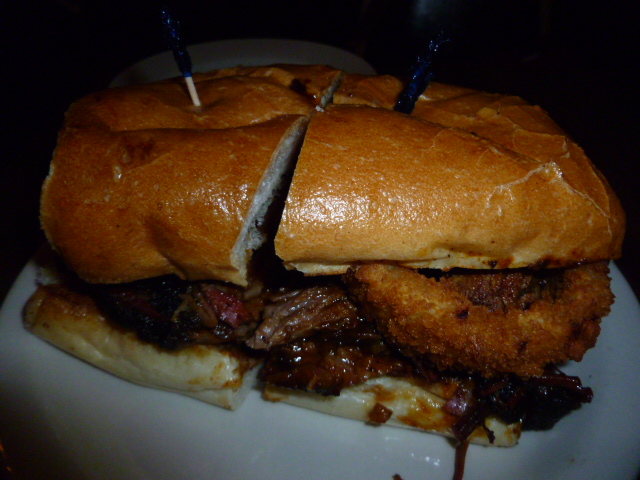 Although the picture doesn’t begin to do it justice, the sandwich is scrumptious and quite large.  I also got to sample their chili cheeseburger and although the picture didn’t come out, the chili burger rocked.  The burger itself is a great blend of beef chuck, short rib and brisket, cooked to perfection on the griddle and topped with the house made chili.  I always try to sample house chili and I’m usually disappointed.  Not tonight.  The chili hit all the right notes and featured a smokiness that comes from using the smoked meats.  It was well balanced between chiles, tomatoes, smoke, spices and love.

There’s so many good dishes that it’s hard to choose, but on our return trip, Anna decided she couldn’t live without the Chinese Chicken Salad.  Not surprisingly, it was a masterpiece.  Jamie makes all of his dressings from scratch and the dressing on this salad was exquisite.  I figured it would be; but to put it in your mouth the flavor just pops. The chicken was very moist and the salad was so big we couldn’t finish it. 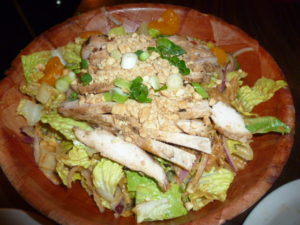 It was great to see Vickie and Mallory again and we made plans to come back to Jaime’s just as soon as we can get back to Sacramento. As you can see from the picture, Mallory has a big dazzling smile that lights up the whole room.

I drove back to Jamie’s in the wee hours and barged in on Jamie and his cook Gary Hoover.  It was a little tight in the small kitchen and a little awkward at first, but they kept on working and I did my best to stay out of their way. I felt like Charlie with the golden ticket to the chocolate factory watching all the good cooking going on.

I really wanted to pick Jamie’s brain about his cooking and he was good sport about it.  We spoke at length about his meatloaf, fried chicken, braised short ribs, and many other great dishes.  We spoke about the history of the restaurant and he showed me around, including the big smoker out back. Gary was friendly too and has been there loving his job for going on ten years. Mallory has been there about eight years (started in high school) and she already has graduated college with a degree in Nutrition.  Good people all around.  Not your typical dive bar crowd. 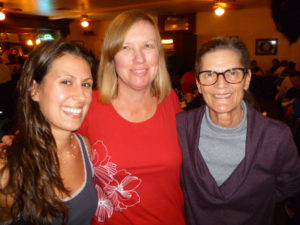 Anna with Mallory and Vicky

I was amazed at the quality and expertise of all the cooking that Jamie shared with me.  He doesn’t cut any corners (although most people wouldn’t notice the difference).  He uses the best ingredients too, like Mary’s organic air-chilled chickens.  The meatloaf features a blend of at least five different cuts of meat and it comes with mushroom gravy (yum).  I asked Jamie how he started his mushroom gravy (thinking it would be butter, onions and mushrooms). Nope.  How about pancetta, shallots and demi-glace. Shut up!

We had a blast talking about food and cooking and I asked Jamie why he does it.  It’s not glamorous and it probably won’t make him rich; but he does it for the love of making good food and doing it right.  He loves to cook and that’s why he is being featured here.  It’s the same reason I make the effort to meet people like him; because they are doing what they love and following their passions.  I’ve had the good fortune to meet some really fine people all over the country, and I’ll be adding the crew at Jamie’s Broadway Grill to the list. Can’t wait to go back.  We’ve already made plans to coordinate the Meatloaf, Braised Short Ribs and Kobe Chuck Roast for our next visit. And lets not forget the Fried Chicken.

Jamie’s Broadway Grill is a hit. They may not have bright lights or dancing girls, but they’re putting out world class food, cold drinks, friendly professional staff, all in a laid back atmosphere that says come for the good times and leave with a big smile on your face.

I can honestly say I’ve never looked so forward to going back to Sacramento.